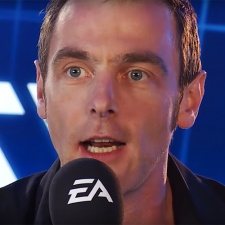 As reported by Video Games Chronicle, the 12-year EA vet will be looking after Sweden-based DICE Stockholm and Ghost Games, as well as British developer Criterion.

Rutter joined EA's Canadian arm in 2007, working as executive producer on FIFA titles starting with 09. After seven years, he was promoted to VP and GM of FIFA Premium, before moving to the role of SVP and GM EA Sports in both Vancouver and Bucharest. Before being hired by EA, Rutter was studio manager at Eidos' Beautiful Game developer.

“David Rutter has moved to Europe and taken on the role of Group General Manager for EA Studios Europe to lead our creators at DICE Stockholm, Ghost and Criterion," EA said in a statement.

"For the last 12 years, David has led our FIFA franchise and EA Sports development teams at EA Vancouver and EA Romania to amazing success.”

Söderlund left EA in August 2018 and has set up his own studio called Embark.