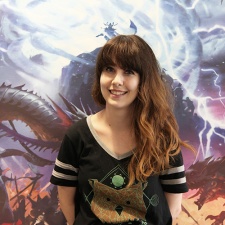 As part of our New Year New Job content this January, we spoke to Creative Assembly's Grace Carroll, who handles social media for the Total War series about what the role entails.

What is your job? What does it involve?
I’m the social media manager for the Total War franchise at Creative Assembly, which involves overseeing all our social media output and strategy. I’m the community’s main point of contact and get to be the conduit between the community and the studio to make sure their feedback is heard, as well as announcing all the amazing things we have to announce.

What are your main responsibilities?
‘Social media manager’ gives a certain impression. So, while it does mean posting on Facebook, Twitter, Instagram and Reddit, it also means looking at moving into new media platforms, advising on best practice, designing and managing campaigns, feeding into the wider community strategy and attending events (amongst other things). There’s a lot involved!

How did you get your job?
I had quite a few years of experience as a social media manager outside of the games industry, and before that, I was a journalist. When I decided to make the move into games I started as the social media manager at Jagex for a few months, before moving on to Creative Assembly. Essentially, I found the job posting on Indeed and just applied and I’ve now been here just over two years!

What special skills or qualifications did you need?
That’s a difficult one – I don’t think there’s anything concrete to point to as needed. However, I have a lot of skills which helped – a journalism background, a native social media user (this one is important to understand the etiquette on the different platforms you’re writing for and posting to) and a genuine passion for social media, not just games. And of course, familiarity with social media software, the audiences you are speaking to and a strategic approach to timing, and I think in this job, a willingness to create your own individual voice that suits both the studio and the community.

What new skills have you had to learn for this role?
Organisation is important. When running lengthy social media campaigns and balancing different titles, there’s a lot involved, especially if there’s a paid aspect to it. Being responsible for a budget is something that I hadn’t encountered before and is definitely something that I had to learn more about. It was scary at first!

Describe a normal day. What do you do?
There isn’t really a normal day in this job! I think that’s part of why it’s so much fun. However, each day does usually involve checking what’s happened overnight, posting something out and communicating with the community. Once that’s done, it really depends on whatever that day has in store.

What are the best and worst parts of your role?
There are a lot of best parts, but I think my favourite is that I get to join the community in their excitement for the next Total War title. It’s nice to show people something that they’re excited for, and be there to join them in their reactions. It’s also very important to me that I have oversight on how we make our announcements, the Total War community has a strong voice and culture, and I take that responsibility seriously.

I think the worst part is that I never really switch off! If there’s a disaster or an issue on the weekend or evening, even though I’m not necessarily expected to work then, I feel strongly responsible for the Total War social media presence and want to act fast to resolve any issues. Even though I might not be in the studio, I still keep an eye on everything that’s happening, and sometimes I will drop everything in an evening or on a bank holiday to sort something out.

What tips would you give to someone applying for a similar position?
Be interested in social media, don’t just see it as an easy way in. If it’s something you’re genuinely interested in, look at how you already incorporate parts of the role into your life, from your personal social media to forum activity to being a mod of a subreddit, and see how you can portray that experience in the best way possible. (Also, make sure you have a thick skin – when people are passionate about something, they’re not always positive about it!)

Update: After this article made it onto Reddit, user Mowgli_78 asked some further questions of Grace, which she answered and we thought provided more insight into her role. Both questions and answers are below.

Does your job include social media managing for non-English speakers? Are there differences between them?
Currently, not so much. The majority of our online audience (according to demographic analytics) is UK/US. However, sometimes if we're doing a specific event in another country, I will message one of our many foreign language speakers at the studio and they'll translate it for us. We did use to have French and German community managers, but it segmented our audience, and I think it makes more sense to have a global page. If something did come up in the future, where I thought it would help to have specific pages for different languages, that's something I would look into.

Do you plan campaigns for, let's say, Britannia and Three Kingdoms differently?
Absolutely I do. So first of all, those are different scales of games. Main games, Saga games and DLC all need different approaches. And not just that, but they can appeal to different audiences. While some of them intersect, our fantasy audience is not necessarily the same as our historical audience is in turn, our Eastern historical audience may be different. So tone of voice and approaches differ from game to game. (I don't want to go into too much detail about planning campaigns, however, as that's the kind of info people pay me for!)

How do you deal with gossip and rumours and leaks? Are you responsible for what to do or you already a have an established protocol by someone else?
With gossip and rumours, it depends. It's fun to see people speculating! I like reading people's theories and so on. However, I do think it's important to manage people's expectations. I don't want everyone, for example, getting super hyped about Thanquol if I know he's not going to be the Skaven FLC and people might get disappointed. So that's the line to sort of balance there. In terms of leaks, it's not just up to me. I deal with everything on a case by case basis, so with the smaller social media speculation, I will make a decision on how we react. But with leaks, it affects brand, it affects PR, so that's the kind of thing we'll all decide together and then implement as part of a wider marketing plan.

When you say feedback is heard at Creative Assembly, do you feel responsible for it? Do you press the developers?
I do absolutely feel responsible, as part of the Total War community team, to be the internal voice of the community. And I think that's valued right across the studio. I will put across the case that I think benefits the community or is what the majority want if there is an overwhelming ask. I will also outline the potential issues with a plan if I think it won't go down well. We also have a game experience manager whose job it is to liaise with the dev team and make sure they hear everything that's happening with our fans - the aspects of our games that people are enjoying and those that might need improvement.

Can you give input for the actual game?
I certainly pass on feedback all the time and am one of many people who make sure the communities voice gets heard, but I have total faith in our amazing developers to take that feedback and make a call on what changes would work best. At CA our developers are really passionate and well informed, so no doubt it will be better with their input rather than mine!

This piece is part of our New Year New Job coverage for the start of 2018. If you want to get in touch to share your insight, email [email protected].