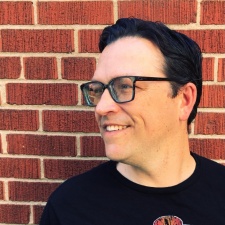 Today, we're speaking to Aksel Lielmanis from Signal Space Lab, who submitted Every Day We Fight to The Digital Big Indie Pitch (PC+Console Edition) #11 sponsored by our season sponsors Kwalee, and walked away as the winner.

Aksel Lielmanis: Led by its Founder and Managing Director, Jose Aguirre, Signal Space Lab’s trajectory is built upon the interest and development of innovative and dynamic content, including video games and new media visual projects. Starting as an audio house in 2015, the studio opened an interactive unit to develop from XR specific content to console and PC titles for commercial and entertainment formats. Today it is home to a team of passionate programmers, animators, designers, and industry vets like myself, who are all in positions to make a direct impact on the road to success. And Signal Space has built a reputation of being one of the most innovative studios in the XR space, with an exciting and diverse pipeline of video games in development including Every Day We Fight.

Tell us about Every Day We Fight that you pitched at the competition.

Every Day We Fight blends traditional turn-based tactics game mechanics with some action elements from the third-person shooter genre. Players can take their time to plan their moves, but crucially, they are in control and choose where to aim and when to pull the trigger. This is true even during the enemy turn, when the reaction system allows players to interrupt the flow of combat to evade gunfire or shoot at an enemy that comes into the line of sight.

What do you think are the most unique and interesting aspects of Every Day We Fight that gamers may never have seen before.

We are very excited for gamers to experience our combat system, which is deeply tactical while including elements of action gameplay. What might surprise some is how much the action enhances the tactical nature of the game. Being in control of exactly how and when your units perform their orders gives players new tactical options. Now you can hold off on firing your overwatch until you see the whites in the enemy's eyes, or set off your trap at the most opportune moment.

We are equally excited for gamers to discover the world of Every Day We Fight. The levels in Every Day We Fight are not simple combat arenas, they represent a setting that is deeply tied with the narrative and the characters. The levels aren’t on a grid, they have a very organic quality to them. Making the best use of the environment will be critical to success, choosing the best cover locations, finding the best lines of sites, and luring your enemies into environmental hazards will all form important aspects of the player's tactical decision making.

Every Day We Fight blends real-time and roguelite elements. What made you choose these genres, and what do you think you bring to it that may not have been seen before?

As we’ve discussed, Every Day We Fight blurs the lines between turn-based and real-time action giving it a unique organic quality. In a fire-fight combatants make choices in the blink of an eye, they adapt to their opponent's actions, etc. Every Day We Fight brings its gameplay closer to reality with the inclusion of real-time systems.

An important aspect of the roguelite genre is how failure is included in the game loop, Every Day We Fight incorporates these elements into the turn-based genre to eliminate a staple of the genre - save scumming. With Every Day We Fight being a roguelite game, “failure” is part of the way forward. Players should feel free to experiment with their tactics knowing that there are systems at play that ensure that with every session they are getting closer to “success” even if they make some missteps along the way.

How did you come to choose the platforms that you would develop Every Day We Fight for?

With Every Day We Fight we knew from day one we were building a game that would benefit from Early Access. While many aspects of the game will be familiar to fans of the genre, other aspects are highly innovative and untested. As such, building the game with the community is the best way to ensure that Every Day We Fight is made for its core audience. Currently, PC is the best platform for Early Access titles.

Every Day We Fight is built using Unreal Engine, this allows our small team of developers to build a big world for gamers to explore in a very efficient fashion. Another benefit of this technology is how accessible it makes porting to other platforms, we can already confirm that we look forward to bringing Every Day We Fight to consoles soon after launch.

In one word, very. Access to capital is the biggest indicator of success, as an indie developer keeping the lights on will be a much harder task than making a great game. Fortunately, there are many resources that can help finance your dream project, Every Day We Fight would not have been possible without the support of the Canada Media Fund and the Epic Mega Grant.

Building an active community around your game will be crucial to your survival and to your ability to raise funds. When trying to find a publisher it can be helpful to receive accolades from respected organizations, such as the Big Indie Pitch.

Our team has adopted 3 core values that would serve any aspiring developer.

We enjoyed the opportunity to discuss our game and it was an exciting platform from which to announce Every Day We Fight as the project we have been working on. The word is out now and that is wonderful.

The opportunity to gain feedback from industry experts is invaluable. While it's validating to know that our demo and vision for the game is in high regard from an esteemed panel of judges, what is even more valuable are the insights into how to keep improving the title. For this we are deeply grateful, Thank You.

Launch day will be just the beginning for Every Day We Fight, we have plans to release a great deal more content after release (both paid and free). Signal Space Lab has many more projects in development that we hope to share with you all soon, including our next cinematic VR experience. Our first cinematic VR experience, Afterlife, which won two awards at the Raindance Film Festival, is available now on Steam, Viveport, PlayStation VR, Oculus Rift, Gear VR, and iOS phone and tablet. Finally, we invite all readers and fans of turn-based tactics games to visit the new Steam page and add it to their wishlist today.

The Big Indie interviews: Pewter Games Studios tell us how a little bit of madness has brought a lot of success