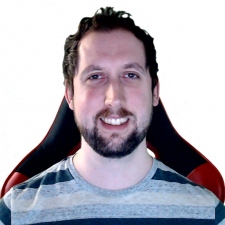 Today, we're speaking to Alex Bailey from AstroNaughty Games, who submitted Grimmstar to The Big Indie Pitch (PC+Console Edition) at Pocket Gamer Connects Digital #1 and walked away with the prize for third place.

Alex Bailey: My name is Alex Bailey and I'm the CEO and Co-Founder of AstroNaughty Games. We're a small studio of about 8 people, mostly located in the Seattle area. I like to think of us as being somewhat of a band of misfits, working to create the best games possible while improving our own skill sets as much as we can.

Tell us about Grimmstar that you pitched at the competition.

Grimmstar is an action-packed space fighter with fleet management and RPG twists. I like to refer to it as an open-sandbox Everspace combined with Homeworld. As the player, you'll have the ability to utilize multiple fleet functions to call in reinforcements, mine resource-rich rocks, salvage parts, upgrade fleet tech trees, and even set up defenses or execute attacks... all while piloting a fully modular spaceship. Our game focuses on telling an emotionally gripping story as the player progresses through multiple sandbox solar systems, being chased by the planet devouring ship, the Grimmstar, and its overwhelming forces.

What do you think are the most unique and interesting aspects of Grimmstar that gamers may never have seen before?

Fleet management is probably the biggest one. Having the ability to command your own fleet while still piloting your own spaceship gives you a real sense of power over some very chaotic situations. Grimmstar will be featuring large scale battles which already includes over 50 ships simultaneously battling each other for control. Having the ability to make decisions while partaking in these very battles requires quick thinking and provides a very rewarding experience... if you make it out alive, of course.

Sci-fi is a genre that offers passionate fans and limitless potential. However, it's also one that is very popular and as such, competitive. What made you choose to make a game in this genre?

First and foremost, we're all big fans of the sci-fi genre, as it really can offer something for everyone out there. With our game, we started with the idea of wondering why nobody had taken the premise of Battlestar Galactica and turned it into a video game. It was a perfect scenario for exploring entire solar systems and creating a unique space-faring experience. While a lot of space games are trying to "do it all" when it comes to mechanics, we're fine-tuning Grimmstar to have a very unique look and feel to take it a step outside of the usual space game tropes.

How did you come to choose the platforms that you would develop Grimmstar for?

From the very get-go, both lighting and data streaming have been very important entities in creating our vision for Grimmstar. RTX lighting became a no-brainer for us to focus on when dealing with not being able to bake any lighting information. Between this and the power of newer SSDs (like M.2 drives), PC was an obvious candidate for us to focus on. But now with next-gen consoles supporting both of these features, we're striving to target them as well.

It is often extremely difficult to survive as an indie developer. There are so many out there, competing for mostly the same things; the primary focus being funding. I've found it's very important to build a proper structure for the development process and for the business side of the team from the very get-go. From then on out, it's part passion, but mostly discipline. Sometimes progress can take a long time and the passion can be lost from frustration, but through discipline, you can persist and continue development. We've had a number of breakthroughs in development thanks to this mindset. Making lists and keeping a calendar has been instrumental for myself, personally.

Do your planning, but also market, market, market. As soon as you have an idea you think would work well as a game, prototype, and start sharing. There are so many places that are extremely supportive of other indie developers. Don't be afraid to share your progress so you can get feedback and critique. Both are so valuable for an indie developer. In some scenarios, you get a nice confidence boost. In others, you'll learn that what you're doing might not be done properly or may not be worth doing at all. Stay honest with yourself in this feedback and use it to make things better.

It went surprisingly well! Any time an event is held online, I expect hiccups and technical errors, but everything flowed along smoothly and the judges were very personable and easy to interact with. It was overall a great experience.

Pitching your game under a bit of pressure really helps you to get hyper-focused on delivering the right information in the right way: quickly with excitement while being relatable. I'm still refining how to deliver the explanations of gameplay loops and mechanics without being confusing. It's surprisingly difficult, but rewarding once you get the grasp of things. There are few things better than having professionals in the industry hop on board with excitement for your very own game.

We're hoping to provide a unique space game experience while being extremely fun and hopefully a bit touching when it comes to progressing through Grimmstar. We have so many ideas that I'm so incredibly excited about, but can't share because it'll be worth the surprise when it comes to fruition. It's almost frustrating trying to bottle that in at times. As for future projects, I absolutely have a couple of ideas in mind and one in particular. Grimmstar needs to be completed first though.