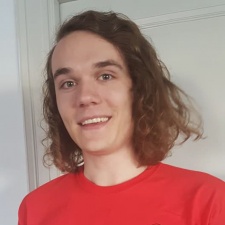 Today, we're speaking to Ramon Huiskamp aka Roofkat Games, who submitted WarpThrough to The Big Indie Pitch (PC / Console Edition) at White Nights Amsterdam 2020 and walked away with the prize for second place.

Ramon Huiskamp: My name is Ramon, and Roofkat is my little one-man studio! This means so far the team consists of just me, with some help from my lovely girlfriend and the occasional hinder from our cat, who enjoys jumping on desks and destroying chairs. I absolutely love designing games, especially creating new or different kinds of interactions players can do in a game. My eventual goal is to grow Roofkat into a 5-15 man company, but I want to make sure I don’t jump into that too fast.

Tell us about WarpThrough that you pitched at the competition.

WarpThrough is a platformer with the vibe of an arcade game, with simplified controls, and a lot of depth to discover. I created a fast paced game that really lets you get into the flow, jumping your way across the level as you take out enemies and get to the next Warphole (which is your goal in the game). There’s a short story mode where you get to unlock different characters to play with: each of which has an unique attack, majorly changing how you play the game. And once you’re done with that – the arcade mode lets you keep platforming endlessly, as well as offering up some challenging achievements to obtain.

What do you think are the most unique and interesting aspects of WarpThrough that gamers may never have seen before.

WarpThrough’s uniqueness has everything to do with its controls. Instead of having a dedicated attack button, you have to stand still to charge up, and then fire off your attack by moving again. This changes the game from moving around and spamming your attack, to a more strategic and at times almost rhythmic game about timing and positioning yourself right. The monsters you face come at you in different ways, increasing the difficulty as you get further and have to face off against multiple enemies at the same time. It’s certainly a challenging game to master, but it’s been a lot of fun seeing people get the hang of the control scheme, and start getting further and further as they slash their way through enemies!

WarpThrough taps into old school arcade mechanics whilst also blending that with short and snappy multi layered gameplay as is more common in the modern era. What made you choose this combination, and what do you think you bring to it that may not have been seen before?

I’m a big fan of simple but deep gameplay, letting you do a lot with a little: and that’s definitely what I tried to do with WarpThrough. In the era of arcade games, developers simply didn’t have a lot to work with, so they did as much as possible with the few interactions they had. While these limitations are no longer as necessary for us, we can still create unique experiences following these principles. In addition to that, we learned a lot about making gameplay feel good over the years, which we can use to make those experiences even better!

How did you come to choose the platforms that you would develop WarpThrough for?

Truthfully, I chose to develop for PC because that’s where I usually play games. On top of which, developing for PC is a lot easier than developing for mobile or console: As the device you create the game on is the same you play it on, it’s quick to set up and test. While developing it, I did get really interested in the idea of a version of WarpThrough for the Nintendo Switch, which would be a great fit. However, I was eager to still get the game released in 2019, so the PC version was prioritized before looking into a switch port.

It’s quite hard! With the amount of games being released it’s very difficult to stand out, meaning you need to have a good marketing and business plan to get yourself some attention. Making a game is already a challenge, but marketing it is another beast. And in order to be successful, you’ll need to do both. On top of that there’s of course a lot of luck and timing involved.

Roofkat wouldn’t have been able to survive if I’d had just focused on creating WarpThrough. I’m really happy with how it turned out as a game, but I mostly earn money through contracting work for bigger gaming companies.

I’d definitely recommend either joining an experienced team to go through development of a game before trying it out yourself, or to have an alternate revenue source.

It was fun! I’m really glad I was told about the format a bit more beforehand, as I really expected it to be a big pitch on a podium when I heard of it. But the small pitches to experienced developers / relevant parties were great to do. It was very short, but that forces you to get to the point quickly, which is nice to practise.

Getting to meet the judges was great, but what I really got out of the experience was some new-found enthusiasm to work on WarpThrough. As much as I love the game, it’s extremely draining to create something like that by yourself for over a year, so after releasing it I was ready to move on to new things right away. Doing the pitches made me realize some of the things I still wanted to achieve with WarpThrough could be fun to work on, and winning the second place for pitching it was a great motivation boost.

On top of this, I’m excited that the Pitch prize includes some advertising space, which I hope will let more people know about WarpThrough!

I’d love to get WarpThrough on the Nintendo Switch, as I think it would be a lot of fun to play on the go, and quickly set it up to locally play with some friends. I’m also busy with some new projects. After WarpThrough released I started creating some small prototypes, and I’m now getting really excited about one of those. I hope to share more about that later this year!