Why Rare finally brought Battletoads back 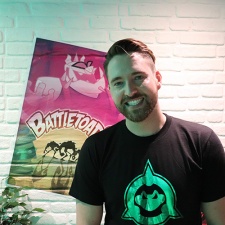 After years of teasing and toying with the fanbase with on-stage T-shirts and characters having cameos in other games, Microsoft finally announced a brand new entry in Rare's classic Battletoads series. Simply called Battletoads, the title was announced at E3 2019 (below) and is being made by UK-based developer Dlala Studios, with Rare providing supervision and polish.

So, how did this come to be?

Well, the team from Dlala Studios came to us a couple of years ago saying they had an amazing idea for Battletoads, bringing the game back in a really unique way that's true to the original but stands up in its own right while paving the way for games like this. We were really blown away by their ideas and storylines for the game. It just felt like a really good opportunity, especially with things like Games Pass. It felt like the right time for Battletoads.

Why wait until this concept to come around? People have been after a new Battletoads title for years now.

It was very much on Dlala. Their pedigree is very much in 2D platforming games with hand-drawn art. When they came to us with stories and character concepts, you could see there was something really special there. One of the things we love about Battletoads is the generational side of things. You have the NES one back in the day, it's been on the SNES, arcades, the Game Boy. All the Toads have had their own look and aesthetic for that particular platform and this feels like the kind of Battletoads you'd see today.

Battletoads characters have appeared in several games recently. In 2015, they were a boss encounter in the Xbox version of Shovel Knight, while Rash was in the third season of content for fighting title Killer Instinct. Was this a way of testing the water, seeing if there was actual interest or whether the hype was from a vocal minority before doing a brand new entry?

Honestly, it was Dlala coming to us with this fantastic opportunity. That was what blew us away. That's the thing we'll always look for - if this is something we'd want to get out of bed for, that we're excited for. Every day is an absolute laugh working on this with Rare and Dlala.

What's the division of labour like between Dlala and Rare?

It's very much Dlala's game and we are coming in from an IP perspective, seeing if we can elevate it. We're calling it 'indie-plus', that feeling of them having this amazing idea and how can we utilise the experienced people at Rare to give something that extra polish. It elevates the game but helps them on this journey of being this awesome development studio.

Long-term, what's the ambition with this game? Is this the first title in a brand new era for Battletoads?

For us, we're always keeping our feet on the ground and doing our absolute best every day. From that, we're just seeing what can come from it. If we do a great job, let's see what the next thing could be.