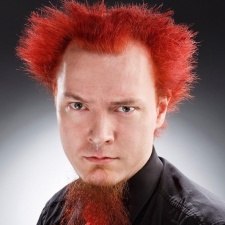 The PC Indie Pitch, is a regular event run by the makers of PC Games Insider. It sees indie developers engage in a speed-dating-styled pitching competition for fame and those sweet, sweet promotional packages.

Today, we're speaking to Frozen Vision's Jussi Autio, who submitted Axiom X to the PC Indie Pitch at PC Connects Helsinki 2017 and walked away with the first place prize.

Jussi Autio: Frozen Vision was established in 2014 by serial entrepreneur Asmo Saloranta and some of the most promising young talents of Northern Finnish game industry. They operated few years on their own until they lured bunch of more experienced guys to join in, including myself. We have for example a guy that used to work in Codemasters in early 2000s and after that on The Thing with Computer Artworks. Awesome guy. He and his friend who also joined made a huge difference on the visual identity of Axiom X. Anyway, already the core recruits of 5 have over 75 years of experience. Therefore the company is going through heavy transformation with Axiom X. We know each other for years – while Oulu is the second most important hub of game industry in Finland after Helsinki, it’s still small enough that everyone who has been around long enough knows everyone else and has cooperated at least once. And with Axiom a lot of people have now gotten back to working together to develop something really really grand.

When it comes to me I’ve been in the game business since 2006. I could say 2005 because that’s when I started with my first company – living off student funds with 5 other co-founder. Officially the company got founded in 2006 and as bunch of university drop outs we ended up taking quarter of a million euros in loan to run it. And I’ve been in the industry ever since. I’ve worked with PC, online, mobile, embedded system and tabletop games both free2play and premium. I’ve founded 3 companies, been entrepreneur in 3 different companies, been lead designer in 3 different companies and all-together that’s 5 companies. But maybe the most recognisable thing I’ve done so far was my 3 years in the service of Oulu Game Lab. I was called in in 2011 to design a new game initiative that mixes education with incubation and all required professions of game development. When it was to launch, I joined to lead it or to be a “Lab master”. As a result I helped 11 new game companies get established – most of which are still running after 3+ years, Frozen Vision being one of them. And I was still lab master when first exports took place which included spreading the model to Japan and the Netherlands. Since I left in February 2015 (to again fully focus on being game dev, instead of just part time) the whole model has been selected as the best youth incubator in the world (and curiously only second best in Europe) and exported further to American University in United Arab Emirates, Romania and Slovakia as well as expanded to other fields than games.

Axiom X is a turnbased, real-time tactical racing strategy game in a dystopian, but pre-apocalyptic near future. Which is funny description, because it’s true. Imagine if X-Com was a racing game and you get the rough idea. Or if you know rather old strategy game from early 2000s called Combat Mission where you gave orders first and then you watched the events unfold for one minute. Well in Axiom X the game flows in real-time, but still the game is divided into turns. During this 5 seconds you give orders to your drivers what they should do in the next 5 seconds. And as they’re then following those orders, then you’re giving already new orders.

This indirect control allows us to build the game to be more cinematic experience than any racing game out there, because for the very first time in racing genre, we can do cool camera angles and slow motions and even replays as part of the game mechanics and game flow. The player can still make his turns and any slow motion actually gives him more time to plan ahead so it feels and looks cool during gameplay, not just after-race replays that nobody watches. Not to mention that since player isn’t driving the car himself, it’s more tactical and fits strategy game lovers like ourselves better than visceral racing. It also allows us to build the drivers in to grand personalities who react differently to events unfolding. Someone will get nervous when others bump into them and spin easily, others go in rage and ignore orders while some will get boosts to their grip skill when in tight spot. And since it’s violent racing series, stress level and focus play a big role and drivers personalities impact the outcomes of those a lot.

I think the golden age of indies has been over for few years now. Unless most of the team consists of superstars of the game industry and can attract millions of investments – I don’t think pure self-publishing is the way to go. Or at least if the team size is over 10 people like in Axiom. We did self-publishing for 6 years with my first company and it was difficult back then. While today I would know how to do it a lot better as we were really making grave mistakes now that I look back, but today the competition is also a lot more fierce – and even with the added knowledge, I think it’s so much worse. Particularly on mobile. That’s why it’s been so great to be back on making PC games for couple of years now. At least on PC one can attract an audience and store front visibility and buying users isn’t the only way to go.

It was great fun. I loved the mix of jury members and the format that made it a bit more personal than pitching to all jury members at once. Also it was good that all pitches were in a row once it was your turn. This way there was no waiting time and I could go back to other meetings right when I was done.

Leverage, I think that’s the main thing. We’re using this victory now to appeal to investors, publishers and Finnish public funders to help us get the rest of the budget covered. We already have some letters of intent on the game and the pieces are slowly coming together.

Axiom X has pretty clear goals and plenty of room for expansions as well. So if it turns out to be a success we’d love to expand it to its full potential. We have preliminary plans for 3 expansions, but let’s see if we get to make those or if we come up with something even better in the process. Future projects all at the moment seem to focus on strategy genre with rpg elements – similarly with some fun gameplay twist as it is with Axiom X.

The PC Indie Pitch is coming to PC Connects Helsinki 2017

Just ONE WEEK to go until PC Connects Helsinki