Is Bossa's Worlds Adrift the next Minecraft? 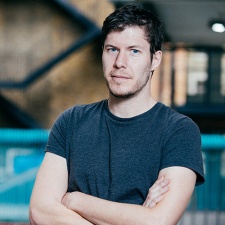 The London-based studio is most famous for physics-based comedy games like Surgeon Simulator and I Am Bread; but its next title is an ambitious MMO that uses cloud technology to create a persistent world.

Worlds Adrift began life in a game jam and puts players in a world of floating islands and airships. There’s a focus on player creation, which led to UK-based Edge magazine calling Worlds Adrift ‘Minecraft for a new generation’.

While lead designer Luke Williams says that no-one should claim to be the next Minecraft, Worlds Adrift is well aligned with the generation of gamers that are used to creating thanks to Mojang’s block-based blockbuster.

“You'd never want to claim to be the next Minecraft, that's absurd,” he says.

“There's a generation of gamers now who are used to building and creating a world. The MMO is a cool genre, and there's loads of untapped potential because everyone has been railroaded down the World of Warcraft path. They're theme park MMOs. Eve is the only real sandbox and the player creativity from that comes from very heavy in spreadsheet or politics; there's no raw creativity like shaping this world.

“It was partly that we can do an MMO that someone who grew up playing Minecraft would be more into. It's a different experience to Minecraft but has a lot of that player agency. But rather than being on a single server, it’s part of a massive community and world that you engage in. There are some restrictions; we can't let players build calculators using red stone or whatever because that could crash everything. We have to be careful with how much freedom we offer. But we do try to offer as much as possible. People could bring our servers down otherwise.”

The game has been made in tandem with London-based tech firm Improbable and its SpatialOS cloud server system. In fact, Worlds Adrift is the first commercial project to use the technology.

“We had an idea and Improbable approached us about SpatialOS,” Williams says.

“We've been working with them for about two and a half years now. It has been completely a team effort in that regard. We've been able to come to them with the way that we as game developers need their technology to do. It's been a collaborative thing of working. The CEO's a big fan of games like Second Life and these huge worlds and they definitely wanted to push that boundary. That's what we have been trying to do.

“I’ve never made an MMO before. We have done little single player games. But with Worlds Adrift, I took what World of Warcraft had done, and saw the restrictions that [developer] Blizzard had in their design and the options they couldn't have, such physics.

“We were like: 'We can have physics, we can take what crafting and survival games are doing' and try and move the progression to player knowledge and skill as opposed to arbitrary stat upgrades. It's just trying to use that tech and see what we can do with it. We've had some issues with stuff that hasn't worked. We're now in closed beta, but we have issues we are working through. This is a huge seamless world that has some growing pains but it's getting there.”

Though now the game has a real focus on player creativity, for a while Bossa was considering procedural generation to help build the floating islands in the world.

“When we were making the island creator, we assumed that we'd have a few handcrafted islands, and then the rest would be procedural – you'd never know what you were going to come across,” Williams explains.

“Obviously, the downside of procedural was that people could quickly realise that they're on an island that's boring because it's procedural so would move on. There were concerns there, of course. What happened was we released the island creator so far we’ve had 6,000 submissions. We have so many islands that as we were building the game and sizing up the world, we were like: ‘We can have every island be player-created’. Then we started to push more onto the players.

“One of the later options we added to the island creator was that players got to choose where loot went. That's beneficial because if you have a procedural system for where the loot goes, then there might be a massive cave system or really cool temple but the crate might be on the wall outside. By letting the players do that suddenly they had much more drive to make cool hidden puzzles. That's a big part of this. We're pushing more into the hand-crafted side of things, having environmental hazards – like thorns or little potential creatures or other dangers. Then the island-creator is essentially crafting a little dungeon. You may walk into a temple and have turrets come up and start firing at you.”

The tools to create islands and airships are inspired by real-life game engines like Unity. And Williams says that Worlds Adrift could help create the next generation of game developers.

“You see people posting stuff after having spent 700 hours in the island creator,” he says.

“It's mental that they'd invest so much time in the game. We actually use a lot of the stuff from Unity, such as the controls. It's almost teaching players how to use a game editor. You can see that in Minecraft – that's pushing a new generation of game developers; they're modding it to make their own games. But also, it's almost pixel artists being created from it, too. In Worlds Adrift, the island creation tool is much closer to traditional game development. We're seeing people building designs and thinking: ‘Yeah, this person could be a professional game designer' and then you find out it's some 15 year-old kid on their summer holiday.

“Even the ship shaping is very reminiscent of 3D modelling. If players want to build a ship they're in a 3D modelling programme where they're building shapes. We're taking inspiration from game development tools, stripping them down and making them accessible. It works. We're seeing a lot of very cool stuff.”

The game is currently in closed beta, with Bossa releasing small batches of keys as to not overload the servers. Recently, some developers have said that alphas and betas are used more often as marketing tools than tech tests; something that Williams is inclined to agree with.

“[Some companies] have betas for games that are like two weeks before the game launches, saying: ‘We'll listen to your feedback’. As game developers you're there going ‘You can't change anything’,” he says.

“You'll never be able to react to anything that comes out of your beta. We already are working on the first patch that addresses a lot of concerns. We've been releasing the keys in batches. We can't just open the floodgates because it's a new technology. We don't want to have people playing it to suffer through massive queues and so on.”

The game is still a ways off from launch, but Williams says that his ambition for the game is to have a fully-functioning world. It’s part of the way there, too. There are already organisations mapping out the world; others are acting as its transport police.

“We've been working on this for three years now and are very much in it for the long haul,” he says. “I just want to see where it can go. I want a world where alliances band together to control regions. There are little trading posts opening up. Players can be someone who trades goods; they can be ship designers. We already have an alliance that wants to be the Armada – this utilitarian force. I want to see these military societies pop up.”

So… Game of Thrones?

“We want Game of Thrones in the sky,” Williams laughs.

“We want to push these sandbox elements. There's a sense of adventure when we add new regions to the world and when we start to expand we're like: 'do you go higher or lower than the death cloud areas'. The world is going to expand until it's this impossibly massive floating island game in the sky. The world is already several kilometres bigger than most.

“But that's the overall ambition; create a functioning society of floating islands.”