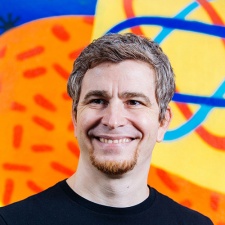 It's hard to believe that a project as ambitious as community-driven MMO Worlds Adrift started as game jam, but like every title that Bossa Studios works on these days, that's just how it came about.

The title emerged as a competition with the theme 'Games that you'd play as a hobby' and was the clear winner - though the developer had to put the project on ice for six months as the tech required to make it simply did not exist.

"It would require a team of 100 people," CEO Henrique Olifiers remembers.

"It was only six months later that we found the pieces; that we can create this with the players, here is a technology we can use with Improbable. Things started to fall into place."

But Olifiers says that the studio is nervous as Worlds Adrift has grown to a size much bigger than the developer could anticipate.

"The idea was that it would be released much easier than it was. Our ambition was to start much smaller, get it out, then build from there. The challenges that kept coming in our direction were much bigger than expected. It got out of hand; it's bigger than we anticipated."

Last week at London Games Festival 2018, the studio revealed that Worlds Adrift would be launching into Early Access next month. This isn't the first time that Bossa has released into Steam's alpha programme, having rolled both Surgeon Simulator and I Am Bread out this way. Olifiers reckons there's 20 per cent of the game there now, with the other 80 being added in during its tenure in Early Access.

"With Worlds Adrift, we're building on top of that experience," Olifiers explains.

"We knew that we would never be able to finish the game without the players in terms of getting their feedback, what they like, what they don't. So many features were rolled out and the users replied asking why we weren't doing it a different way. We rolled back the changes then back again. That's only possible because of Early Access. Since we started, and what Early Access is today, it's a very different place.The players on Steam have much different expectations because some games came to Early Access ready formed."

One feature that Bossa has been shouting about with Worlds Adrift is its community; the firm has garnered a - by and larger - rather positive fanbase on its forums. Fans often say they'd rather the team took their time on the title rather than rushing something out; a largely unheard-of sentiment in video games comment sections. So just how - when gamer toxicity is a real hot topic - has Bossa managed to achieve this?

"The first [tip] is the most obvious one: when you have a negative input, usually it comes from a good place," Olifiers explains.

"These people have to find an avenue to vent it and so on. There are several ways to manage this - giving the players a means to do that outside of the public space is one of them. Subnautica does that well - after one minute there is a box that slides onto the screen asking if you have feedback. That is one way of doing it.

"In the rare occasions where the toxicity doesn't come from the right place because they are trolls, just stamp them out as you see that. You can try and engage but if you see the intent is bad, then you have to cut it out.

"Try to focus on the positives and elevate the positives. The people who are coming from the right place, even if they are toxic, they will see that and try to go in that direction as well."

I hope that Worlds Adrift is a popular game and people are generally having fun and looking forward to what it is going to bring in the next two, five, ten years that will keep them invested emotionally in that universe

When it does launch next month, Worlds Adrift will be the first commercial project using Improbable's SpatialOS cloud tech. Bossa isn't new to new technology, having made games for Apple Watch and Oculus. Olifiers says that despite being literal pioneers, he and the team aren't feeling much in the way of pressure to showcase SpatialOS.

"There is pressure to make Worlds Adrift a good game," he says.

"Because it focuses so much on that technology, a lot of the stuff that goes wrong has to do with our use of the technology. It sometimes goes in the wrong way. The pressure is to get it all working; sometimes it's on Improbable, sometimes it's on us. That's what a partnership is. For you to be riding the train and laying the tracks as you go - which is what happens when you're the first trying this technology - is nerve-wracking."

Looking at trailers for Worlds Adrift and Sea of Thieves, you'd be forgiven for drawing some comparisons. Both are massive worlds to explore with your friends while getting into trouble with other users. So, it might be a concern to Bossa that much of the hype surrounding Sea of Thieves has dissipated, despite a strong initial performance, with complaints of there simply not being enough content.

But Olifiers that Worlds Adrift should be able to retain players, in part due to its robust physics system that allows for real unexpected gameplay.

"Because of our physics, there's more stuff that can be done by the players that we had never anticipated," he explains.

"For instance, I have seen players build a barge and add a lot of logs on top rather than canons, flying over an enemy ship and tilting it so that the logs would kill the players beneath. That's not a system we have to build; they are making content by using the systems we have built. That's what Worlds Adrift has going for it.

"That said, Worlds Adrift falls short of all the features we had planned; we have a backlog the size of a tower back at Bossa of content to go into the game. The question is 'when is it enough for us to start the journey?' so that we can keep expanding. I'd be surprised if that wasn't the case with Sea of Thieves as well. I imagine they'll keep on adding to the game.

"The reason why we are on Early Access is precisely that - we hope that it will buy us some patience from the players while we keep updating the game. We are now in a cycle of updating the game every two weeks. We have done our last four updates in that cadence; before we'd never know. We are doing that because we want the players to see that we are committed to keeping the game fresh. No two weeks will go by in the future without something new making it into the game. They'll know what it is in advance because the roadmap is now public."

With the Early Access launch looming, it's clear that Olifiers is looking at next month's release as the first step of a long journey.

"I hope that we manage to create a game that the players have as much fun as we've had making it," he says.

"That's a lot to ask because we are so invested in this game that we can't tell anymore whether it's good or bad. That's something every developer knows. When you are so close to the game you lose perspective. I can see, by my nature as a game developer myself, all the bugs and shortcomings and stuff I want to make into the game. Some other people can only see the good things. I hope in a year's time, Worlds Adrift is a popular game and people are generally having fun and looking forward to what the game is going to bring in the next two, five, ten years that will keep them invested emotionally in that universe."

"I do see [Worlds Adrift being around in ten years] because I have made games in the past that are still around more than ten years on," Olifiers says.

"I hope that is the case for Worlds Adrift as well. But that's for the players to decide. I can wish as much as I want. It is for them to judge."