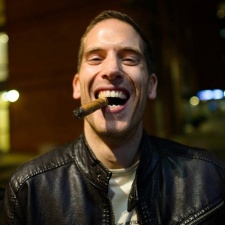 Spilt Milk’s sci-fi action MMO Lazarus has come a long way from inception to its development.

Originally dreamt up as a mobile project, the title was put on the shelf while the studio worked on its most recent release, Tango Fiesta. But when the opportunity to meet with cloud server tech giants Improbable came up, and the scope of the MMO project expanded dramatically.

“Improbable was looking for a small studio to develop a small project and use its tech in the market; something that ideally would be a commercial launch and not just a tech demo,” studio founder Andrew Smith says.

“We pitched three ideas with them, one of which was 'Asteroids: The MMO'. There are a lot of games like Agar.io that demonstrate a want for these casual arcade with some multiplayer angle. It went from there. When we proved we could make Asteroids the MMO, we all sat down together and thought about what we could do with this. It felt there was a lot of potential. We looked again at Lazarus as a potential concept; the thematic stuff, the work we had done on that, not to mention the cool, and thought it was a good way to suddenly jump forward a chunk. We had a load of pre-production for free and went from there.”

Using Improbable’s SpatialOS, the scope of Lazarus has grown exponentially, with Smith saying that the tech is letting smaller teams compete with triple-A giants.

“There are three of us on the project initially - that's up to nine counting part time and contractors,” he explains.

“We're still able to make a game world that's as big and as rich as something you'd expect from a much bigger studio and compete in that space. It's a top down 2D space adventure gameplay space but we're set in space so we're not going to have verdant forests or arctic dungeons to explore but you'll still have a density of systems and interactions.

“That's actually what matters. And we couldn't have done that without SpatialOS. It's going to be incredible seeing what really big teams do. There's us making what we're making and it's very contained. We made sensible decisions as to the scale and how we would scale. Bossa is the next level up. The question is who is going to throw the first triple-A team at this – what's possible there is really exciting.”

There are three of us on the project initially - that's up to nine counting part time and contractors. We're still able to make a game world that's as big and as rich as something you'd expect from a much bigger studio and compete in that space.

Asked about the current MMO market, Smith says that the once stagnant space is now thriving once again.

“Destiny and The Division solidified the action-first MMO,” he says.

“They codified some design elements in the way that you form parties and go on raids and that sort of thing. They're heavily inspired by more traditional MMOs. We'll see more variations on that as more people realise there's money to be made I suppose. Like with Unity democratising games development you see this explosion of creativity and interesting ideas in any genre you can pick, we're on the cusp of that with MMOs with this kind of tech. That is tremendously exciting.

“There are some standout games in the MMO market but it's pretty stagnant creatively in terms of genuinely offering different ways of interacting with MMOs. There are so many that are the World of Warcraft template or a light twist on that. I get why – it makes sense. There is money to be made and they're very expensive things to make and you want to play it kind of safe or at least to a market that you know exists. You're going to see some big changes.

“Realm of the Mad God has come out of nowhere and does brilliantly and is really interesting on a very arcadey boiled down level. Then you have some really interesting stuff. It's a shame Second Life didn't go anywhere. The idea of Minecraft MMOs where it's about crafting and creating things is interesting. There's going to be a blurring of lines; we've seen a lot of games adopt multiplayer in a way you maybe wouldn't have seen before. That's going to filter upwards into MMOs.”

Much like the studio’s previous title, Tango Fiesta, Lazarus is set for launch in Early Access next month. This prior experience has coloured Spilt Milk’s approach this time around.

“We launched Tango Fiesta into Early Access the day after Valve emailed everyone in the industry saying 'Early Access is very much about broken games; don't go and download them if you think you're going to get a good experience’. I’m paraphrasing heavily,” Smith says.

“They’re right though. The passion to get a game early was there, no doubt. But the understanding of what that meant was not. It was on us to educate consumers. A lot of people were surprised by that – we were. People are paying money for your game and you need to be really careful about how you sell that to them. You shouldn't even be selling it; that's an interesting word in that context.

“Tango Fiesta and a lot of games like it are not suited to Early Access. People want something that is very, very polished and if that means it's a tiny experience, then that's fine – they can imagine the rest of that experience. If one level of something looks amazing and is finished, then you can say 'Over Early Access we'll do ten more levels'. What we did with Tango was a fairly rough pass at the first few worlds of content. It was missing a boss or something but people didn't really get it. We had to be very responsive in how we handled it. We were commended for that. But it was tough.”

In order to secure a large playerbase for Lazarus, Spilt Milk has opted to go free-to-play for the title.

“We just wanted to build the community around the game,” Smith explains.

“That's how it's going to live. Players are going to be a really important part of the ecosystem of the game if you like. That's the simplest way of getting a many people as possible. It's removing barriers. Fingers crossed. Hopefully they'll stick around. That's our job, to make sure it's fun enough that they stick around.”

He concludes: “We want it to do as brilliantly as it possibly could. It's a free-to-play arcadey shooter – hopefully there's a lot of appeal in that. It's also a sci-fi- MMO, and there are certainly fewer of those than fantasy ones.

“Realistically we want it to support itself and support us to continue that and just carry it on for a while.”

Is Bossa's Worlds Adrift the next Minecraft?