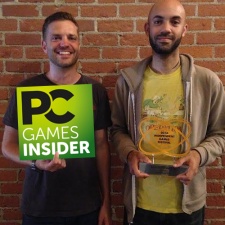 Back in 2014, California-based Night School Studio was set up by Disney and Telltale vets Sean Krankel (right) and Adam Hines (far right). The duo's debut was 2016's Oxenfree, with the company also releasing a mobile title based on hit television show Mr Robot that same year.

As of March of this year, Oxenfree has sold well over 1.5m copies, but there are probably around three million players thanks to subscription services like Xbox Games Pass and Games With Gold.

Where Oxenfree was a supernatural coming of age story, Night School's next game takes a slightly different tact, with players having to, er, try and outdrink the devil.

"It kind of did come from a night-out type setting. Initially what we had wanted to do after Oxenfree was built a game that had a smaller environment but also had different characters from different walks of life in it," Krankel says.

"We were looking at things like Papers, Please or other games that had a certain density as opposed to a very sparse and large experience. That transitioned to thinking a bar could be cool, but no-one has really made an entire experience around that. From there, we figured players didn't want to be a bartender per se and that it'd be more fun to go out on a crazy night. Then we looked to a lot of inspiration - things like Superbad or Edgar Wright's movies - about those 'crazy night out with your friends' stories. Finally, we knew we were making a bar game, we knew that drinking was going to impact the player, but we were asking who the craziest person you could go up against was. As a joke we were like: 'Satan?'. We sat on that for about a week - we weren't really serious - but then thought it was actually pretty badass."

In recent years, the notion that single-player, narrative-focused games aren't financially viable in a market focused on more service-based and longer-term affairs has emerged. Oxenfree's 1.5m sales count - and three million-strong player base - show that these games can be commercially successful and attract a large audience. And it's that latter part that Night School is looking to take advantage of to ensure that the forthcoming Afterparty can be successful.

"I don't think we've got it all figured out, certainly. In the case of Oxenfree, what we ended up doing was an additional free DLC that was a New Game Plus mode where a second playthrough changed the story pretty dramatically," Krankel explains.

"That was intended to be another press moment and also it was content that didn't make it into the game the first time. It absolutely had the desired effect, which was pretty exciting. That was a roll of the dice - we didn't know that was going to work. When Oxenfree came out, we didn't exist, we didn't have an audience. Now we have an audience we communicate with and understand what they like. It isn't about trying to hit everybody, it's more about making sure our core is really excited about something and really figuring out what they want. They can also be excited and talk about it from there.

"We want to make sure that from a business perspective, we don't impact the creative of the game in any negative way which you're constantly drawn to. I'm sure there's a version of this where it's free-to-play but you buy each drink as you play the game. For us, if the title is about the right scope and we know the audience we already have and the audience is broad enough that it can bring in new people, that's kind of all we want to do. We know there's a ceiling for the success we can have. Afterparty isn't going to be this on-going through-the-roof thing. But we're totally fine with that because we like making what we're making."

We know there's a ceiling for the success we can have. Afterparty isn't going to be this on-going through-the-roof thing. But we're totally fine with that because we like making what we're making.

Promotion is, in fact, the biggest learning that Night School took away from its time working on Oxenfree.

"We tried to be really secretive because the story was a lot more mysterious; there were twists and turns we didn't want to give away and we were really precious about things," co-founder and game director Adam Hines says.

"We were trying to build intrigue, not hype, which worked to a certain extent. With Afterparty, because it's much more of a comedy and a high-concept that everyone understands, we've tried to share a lot more about how we are making the game, the characters you'll meet and so on. That was a big lesson, getting people engaged earlier, repeatedly, letting them in a bit. It was interesting with Oxenfree seeing how much people replayed the game, what choices were made and what they dug into - tuning into mysterious signals, ARGs etc. We've been trying to do more of that with Afterparty in terms of what you are able to interact with and the different paths you can go down."

As said before, Krankel and Hines are both veterans of more 'mainstream' game developers, the former having worked at Disney in the past while the latter was employed by now-defunct studio Telltale Games. Both of these companies are no longer with us, with Disney exiting the games industry several times while The Walking Dead firm imploded in disastrous fashion in September 2018. Still, Hines has taken some lessons away from his 16 months working at Telltale.

"That taught me how to make these kinds of games, these very choice-driven, story-focused titles that really hinge on the player's investment in the characters and really feeling they are those characters trying to make those hard decisions," he says.

"It taught me what people cared about when they played those games. When I went in, I thought people generally would want a million choices and a lot of fine grain detail in what they are doing, but people want a greater mix. They want that fine detail but also the big obvious 'Who dies right now?' choices. Users want to be reinforced that their choices matter in subtle and big ways. From a business point-of-view, it scared us about taking on more than you can eat at once. We're really trying to be really focused with the projects that we do and careful not to grow too fast. So far it's been good."