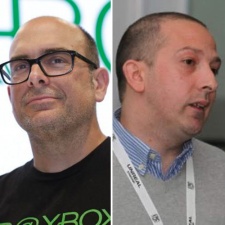 It's fair to say that when Microsoft's [email protected] was announced early in the Xbox One's lifecycle at Gamescom 2013, many people felt it was the Big M imitating Sony in putting indie developers to the spotlight.

The fact that that console was the subject of myriad negative press coverage didn't help matters either. Now we're approaching the [email protected] scheme's sixth birthday, it feels that we didn't give Microsoft enough credit for its indie programme. At GDC this year, [email protected]'s European head honcho Agostino Simonetta (pictured, far right) told PCGamesInsider.biz that games in the programme had generated more than $1.2bn in revenue, a $200m increase on the $1bn announced at the San Francisco event the year prior.

That's on top of the fact that Microsoft is still going out of its way to support indies - something that doesn't appear to true for console rival Sony.

"The last twelve months have been the best for the programme to date," [email protected]'s global boss Chris Charla (pictured, above right) tells PCGamesInsider.biz.

"It's just been amazing to see how the market has embraced games from independent developers on Xbox and the broadening appeal for games."

One of the big shifts in Microsoft's games ecosystem recently has been a greater focus on its Game Pass subscription service. That started off in 2017 as a means for consumers to access back catalogue titles, with the Big M's first-party releases, including Sea of Thieves, State of Decay 2 and Forza Horizon 4, coming to the service on the same day they launch in stores last. Now [email protected] projects are included, something that Charla says has had a dramatic impact on indies.

"The effect that Game Pass has had on the ecosystem, just in terms of really being something that has broadened the visibility of games from independent developers in a mass market, has been huge," he says.

"People are downloading those games, enjoying those games, playing new games in genres we know they'd never downloaded before on Xbox. That feels awesome. We never try and rest on our laurels and we're always trying to work and do better for developers and consumers, but the past year has been great."

Subscription services are - whether you like it or not - going to be a central part of the games industry's future. Streaming, too, will enable more consumers than ever to access an increasingly large array of content. As a result, it's important to understand how developers are being compensated for being part of an all-you-can-eat service, as they won't be making a slice of money from sales anymore.

Charla declined to comment on the specifics of Game Pass' compensation model but said that the [email protected] team wants to ensure that developers don't lose out by being part of the subscription service.

"We work a lot with the Game Pass team as we work to help them bring independent developers into the Game Pass programme and want to make sure that no developer is ever disadvantaged by being in Game Pass," he says.

"It needs to be a net positive for the developer and consumers, too. We believe this is a really important way for people to discover new games and, while certainly not the only way, we think it'll be an important way for people to play games and for the developers get their games out to the public. It must be sustainable. It's something that's really a core tenant and something that Game Pass people say all the time and we ask all the time in meetings whether something is developer-friendly. We talk it through and that really is a core tenant to everything we do."

People explore new genres thanks to Game Pass and buy titles eventually where normally the barrier to entry would be too high. People are curious; they want to see the latest. They have a more varied taste, which is one of the strengths of Game Pass,

As an example of the benefits of Game Pass, EU boss Simonetta gives Curve Digital's Human Fall Flat, which was exposed to a large audience as a result of being part of the programme.

"Game Pass is a very curated programme - we want to make sure that if you have Game Pass, you have the opportunity to explore a varied catalogue of content," he says.

"We looked at people playing Human Fall Flat as part of Game Pass and 40 per cent of those users had never played a puzzle game before. People explore new genres thanks to Game Pass and buy titles eventually where normally the barrier to entry would be too high. People are curious; they want to see the latest. They have a more varied taste, which is one of the strengths of Game Pass, allowing people to experiment in a very easy way."

There's a lot that Microsoft does to support indies. Much of it is public; having developers at huge trade shows, helping out with discovery and dev kits and so on. But Charla says the firm does a lot behind the scenes to help out smaller developers.

"We see the data from thousands of game sales," he explains.

"While we'd never share any individual game sales, we will share broad trends that we see with developers. A large triple-A publisher might have an entire research department but a smaller independent team might have just two people in the whole company; they don't have a research department. We see that we can have a function bringing our resources to help be that research department in some sense. So every few months we'll go out to developers under NDA and share information about the trends we're seeing when's a good or bad time for launch. We share all this data and we're transparent as we can be. Then it's up to the developers - they're smart, so once they have the data, they can make smart choices. But we really see that as a big benefit that we have been able to provide in the last few years."

Looking to the next year, this support is key to Charla's ambitions for [email protected]

"Helping developers with both navigating the platform waters as we move into changing times and helping them navigate discovery and making sure people know about cool games, see games and get to play cool games, whether that's games that they're buying or they access as part of a subscription service," he says.

"That's what we want to see. In many ways, it's more of the same - we want to keep listening to devs, keep doing what they're asking us to do and keep helping to grow the industry with them."

Meanwhile, Simonetta says that he's keen to show how committed the programme is to independent developers around the world.

"The exciting thing for me - and I've been working with indie developers for 15 years - is that from quarter to quarter, everything changes," he says.

"What I think you can expect from us next year is the same level of commitment and more than we have shown this year. When you look, over the years, people weren't initially sure about [email protected] and whether we were serious about it - we have proven to the independent community the strong belief we have in this category."

Reply
Austacker
One of the best initiatives Xbox has done this generation. I have bought quite a few indie titles on Xbox and whilst the often lack the AAA production values of the big studio releases, the often make up for it in character, story, mechanics and raw gameplay.

Indie hits absolutely have a home on console and I love supporting their efforts. Kudos to Microsoft for having the vision to get on board supporting the indie studios - let's sincerely hope they continue to building that strong relationship with the indie community and bring us many more sleeper hits in the years to come!
Posted 2 years, 12 months ago

Reply
Andrew
Hopefully they do it the actual first 2 years their next console comes out too and not as an embarrassing 180 just for PR.
In summer 2014 there were literally 10 weeks of ZERO releases on the Xbox One. Even 1 indie game could have filled that void.
Posted 2 years, 12 months ago