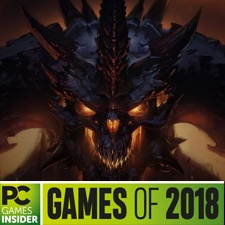 Prior to this year's Blizzcon, the firm had been very open about the development of a new mainline entry in the demonic franchise. The company had even said we wouldn't be seeing anything from this new title for some time.

So come November 2nd, when Diablo Immortal was announced to the world, all hell - pun intended - broke loose. The fans were up in arms that their favourite franchise was getting the smartphone treatment rather than a brand new all-singing-all-dancing PC or console iteration.

It shows that there is still a massive stigma surrounding the mobile games space. Indeed, the early days of the App Store and Google Play marketplace did see some rather, um, lacklustre ports of 'traditional' titles to a mobile format. Companies like Rockstar and Square Enix released direct version of the likes of Grand Theft Auto 3 and Tomb Raider to iOS and Android - complete with virtual joysticks - which did not go down too well.

Yet times have changed - though try telling gamers that - and now triple-A franchises are getting the love they deserve on mobile platforms. We have to look no further than Square Enix Montreal's Go franchise, which brought IP such as Hitman, Tomb Raider and Deus Ex to the small screen. Oh, and then there's Hearthstone from none other than Blizzard which proved that the formula works.

But of course we got the same outrage we always do.

The fact that Blizzard has teamed up with Chinese publishing giant to launch this game shows who this market is for, despite the company's strong denials. Mobile is the dominant platform in that part of the world, and this region is becoming increasingly important for the global games market. So it stands to reason that Blizzard, a company that already has a strong following in China thanks to Overwatch and World of Warcraft, should try to capitalise on this.

As PCGamesInsider.biz has written before, Western gamers are becoming less and less of a focus for triple-A companies as they try to attract the growing and lucrative Chinese middle class. It's not just Blizzard either; Ubisoft, too, has made its intentions for China very clear, making some ill-received changes to its flagship tactical shooter Rainbow Six: Siege.

Whether Diablo Immortal is any good is yet to be seen, but one thing is certain - a game maker with the calibre of Blizzard should have the confidence of its fans because time and time again the firm has smashed it out of the park.