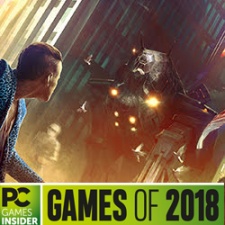 At the end of every year, PCGamesInsider.biz takes a look at the titles that defined the last twelve months. They don't have to be the best games, or even ones that launched in that timeframe, but they will have had a massive impact on the market.

The triple-A games industry has a nice habit of turning every single moment into a big marketing opportunity.

Hell, even one of the biggest nights of the industry's event calendar, The Game Awards, is effectively our Superbowl, complete with a whole load of trailers for new games and content. Then there are the big shows like E3 and Gamescom, with the former in particular being more or less five days of the biggest games companies on the planet sharing their wares and drumming up the hype.

The problem with that kind of culture is that if you're someone like me, contractually obliged to follow all of this, after a while, you just stop caring. When you're told to be excited all of the time, after a while the hype has no effect.

But then along came Cyberpunk 2077, closing Microsoft's E3 conference and interrupting Big Phil Spencer mid-flow in his end-of-show wrap-up. Though it was widely rumoured that the title would be appearing at the LA-based trade show, how it was revealed was shockingly eye-catching - with a colourful and loud trailer that gave a glimpse at a fascinating world - turned peoples' heads. That we were all still shocked and excited

It could have gone too far, however. The trailer showed no gameplay, with developer and publisher CD Projekt RED giving behind-closed-doors previews to press to show this. The hype reached absurd levels. With the media telling consumers about this amazingly detailed work, the visceral gameplay and deep systemic gameplay, readers around the world were likely painting a picture in their head of what this game was like. I know I was, before eventually attending one of the press previews at Gamescom just two months later in Cologne.

The demo I saw was cool, it was fine, but I left with the impression that as good as it was, CD Projekt might have been allowing the press to build a bubble of hype that would be shattered the longer they didn't release more information to the public. In fact, I was planning on writing a piece about this on the way back from Gamescom. That was before the Polish games firm ran a livestream showing off the demo that journalists had already seen. The result - 4.7m people watching, more consumers being very excited about the game, but this time with expectations being managed. They were now seeing what the game was like.

The danger was that Cyberpunk 2077 would end up like Watch Dogs - hyped and wildly ambitious, perhaps even unrealistic compared to the final product, with consumers reacting negatively to the final release because it didn't match their expectations.

Whether the game is actually any good is another matter - we have no idea when this game is going to be coming out, though our money is on 2020.

And we know that Cyberpunk 2077 is an outlier. This was a project that was originally revealed back in 2013 with a teaser video, at the time made by a studio in Poland making games based on a series of books that at the time had a pretty niche, local appeal. Five years later in 2018, CD Projekt RED is recognised as one of the best and most-loved RPG makers in the world, driven to the big leagues by 2015's The Witcher III: Wild Hunt.

What we saw this year was a company building on the goodwill it has received in the last three years, sharing what it is working on while also making sure that the hype doesn't get out of hand.

CD Projekt RED level designer Max Pears is going to be on stage at PC Connects London 2019 - you can hear more from the man himself, which should be read in a smooth jazz voice. PC-only tickets are available here, with the passes that grant access to Pocket Gamer Connects and Blockchain Gamer Connects available here.