The PC Revolution: Emerging tech could make it easier to make much more ambitious titles 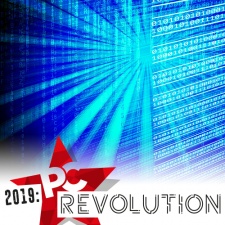 Making and releasing a video game is one of the hardest things to do.

Having spent five years speaking to game developers, it's honestly a miracle any projects ever make it to launch. Not only is there pressure from publishers and arbitrary release dates that need to be met, but there is also the reality that games have been held back, limited by what is possible with the technology at hand.

But that is all going to change in the coming years with a wealth of new tech that will enable developers to make more ambitious titles much quicker.

Machine learning, for example, has been on the horizon for the last decade and is already in operation in mobile operating systems such as Android. But there are huge implications as to how this technology could impact making games. Ubisoft, to pick one of the triple-A giants, has been experimenting with using this tech to clean up motion capture data. Footage that would take four hours for a developer to prepare for use has taken just four minutes for a trained AI. Nvidia, too, has been toying with this innovation, announcing at GDC this year that this technology can be used for small yet important details such as where a character's foot is placed in a game - a solution to a long-standing problem.

Machine learning and AI can also help narrative-focused titles, too. Chet Faliszek, a veteran of a small PC games developer called Valve, is experimenting with this tech at London-based firm Bossa Studios. Ultimately, this will allow developers to breath more life into their worlds with NPCs being able to react to player choice on the fly. With the right parameters, suddenly a lifeless non-playable character could become an unpredictable - to the player at least - agent in the digital landscape.

It's not just development, either. Though New York startup SpiritAi is using machine learning to create believable characters and rich dialogue, the firm is also using this same combination of technology - AI and natural language recognition - for its Ally project, a means of moderating communities in a way that is effect rather than the rather reductive processes employed at the moment.

Back to game development, and cloud tech, too, is going to have a massive impact on the games market. Since the launch of the Xbox One in 2013, there has been talk of companies using cloud technology to enhance the ambition and what is possible in a project. Back then, Microsoft was talking about using its Azure business to assist titles such as Crackdown 3 and Titanfall, though as a talking point, cloud tech in games is something that the Xbox firm has been very quiet about since the launch of Respawn's 2014 mech shooter.

Enter Improbable and its SpatialOS cloud tech which allows developers to create ambitious and persistent worlds with the horsepower of a variety of cloud servers at their disposal. SpatialOS isn't the only horse in this race with fellow-London start-up Hadean with its HadeanOS and Aether Engine. Improbable already has games out in the wild, such as Worlds Adrift from the aforementioned Bossa Studios, with a wealth of big companies using that firm's tech. This means that we could see a wealth of MMO and ambitious online titles coming to market. Where before, companies were rather conservative in their investment in this space, largely due to the fact that the infrastructure involved in making an MMO was - and pardon my French here - a massive pain in the arse to design. This was also why we saw so many online RPG titles that closely resembled World of Warcraft; companies saw a formula that worked and given the massive overhead involved in making an MMO meant that deviating from it was financially risky. Having another company handle this important infrastructure frees up a lot of bandwidth and investment into, well, making a game, rather than the service.

We've already seen a wealth of new and interesting online titles being powered by Improbable's SpatialOS, such as the aforementioned Worlds Adrift, Lazarus from Spilt Milk, in addition to 1,000 player battle royale title Mavericks from Jagex vet Automaton, alum from modern Halo maker 343 Industries at new developer Midwinter with their project Scavengers, which debuted at The Game Awards last week.

It isn't just startups getting in on this action, either. EA recently announced that its Project Atlas cloud tech was not just for streaming games a la Netflix, but adding extra functionality to titles that use the Frostbite engine. No doubt we'll see Microsoft picking up this technology as a talking point in the near future, too.

And finally, we come to raytracing which is arguably one of the biggest advancements in games development. Until now, studios have had to use processes such as rasterisation which ultimately add a lot of time to making games. This is said with no disrespect to the myriad talented game developers that work in this industry, but many games launch hacked together. Having such a fundamental technology as lighting being handled by engine and middleware, that also frees up a lot of time for developers to do new and interesting things with their time and money.

Over the last decade, Unity has done a very good job of democratising games development. Before, studios would have to spend a huge amount of time and money making their own game engines, but now middleware such as Unity and Unreal have made it possible for a greater number - and wider variety - of people to actually make games.

We're about to see a similar shift in the way that games are made now with this cocktail of emerging technologies coming to market. And the industry will be much better for it.

On PCGamesInsider.biz we're going to be talking about these trends and emerging technologies with weekly editorial pieces, letting you know what is happening, the impact they could have and what you need to know to stay ahead of the curve.