"You don't want to be a clone" - How Toadman plans to innovate on the Dark Souls formula with Immortal: Unchained 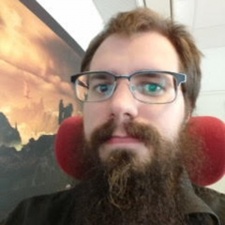 Since the release of Demon Souls back in 2009 - and Dark Souls subsequently in 2011 - there's been a whole genre of games inspired by FromSoftware's dark RPG series.

We've had the likes of CI's Lords of the Fallen, Hangar13's The Surge via Koei Tecmo's Nioh, while in the indie scene, smaller studios have been giving the genre with Eitr, Salt and Sanctuary and Dark Maus.

But all of those games have been missing one, crucial element. Guns. Luckily, Sweden's Toadman Interactive has opted to take the Soulslike in a sci-fi direction, with futuristic firearms replacing the swords and shields of Dark Souls games to date.

"That's the simplest way to put it. It's more of an action-oriented RPG shooter. We have the stamina thing, we have lock on, as well as free aiming. You can't have not free-aiming in a shooter. The point of lock-on is that we want to shift the focus from the twitch aim combat, to be more about positioning and make it more tactical. Players need to be able to read the enemy and dodge at the last second then capitalise when they are in the wind-down phase. The different weapons in the game support different kinds of play."

As said before, the game is part of a burgeoning genre of Soulslike projects. Thorwaldsson says that its different gameplay sets it apart from the crowd.

"We felt we were making our own niche within the genre," he explains.

"We started developing this two and a half years ago and the genre really cemented itself in the first half of 2017 with Nioh and The Surge and games like that. That's also why we decided to focus more on the shooting mechanics. I love Nioh and The Surge, Salt and Sanctuary is amazing. We wanted something of our own within that space. That's why we have headed in a more action-orientated direction."

Though its clear where Immortal draws its inspiration from, the developers at Toadman have been trying to innovate on the formula.

"You don't want to be a clone. Not that there's an actual problem with that. We're quite a small team, about 18 people, and we want to make cool stuff. Making a clone isn't always the coolest thing you can do. We want to find our own niche and find out what kind of game do we miss in the market right now."

To launch Immortal: Unchained, Toadman has teamed up with London-based games publisher Sold Out for the console versions, with Game Odyssey handling the PC version, but for a time it was looking into releasing the game itself.

"We looked into self publishing, but the thing is that there's less than 20 of us, we don't have the distribution channels to handle retail or anything like that," Thorwaldsson explains.

"If it was digital only then we may have done it. For a while we thought about only doing PC - if you look at PC it's way easier than consoles in terms of getting it out. Making a splash is not as easy. I'm not sure if we'd have gone with a publisher on Steam. We weighed the pros and cons and never really got to a conclusion because we just ended up partnering with Sold Out instead. We probably would have always gone to a publisher."

The game is set to launch this year, with the team's ability to carve out a gap in the market being a something of a source of anxiety for Thorwaldsson

"We're of course hoping it does well," he says.

"But are we going to be perceived as a Souls clone or an awesome Souls shooter? That is one of our biggest hurdles or goals."