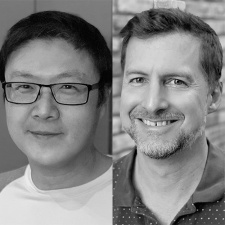 Two of the developers who worked on the iconic Diablo 2 have founded a brand new games studio.

Peter Hu and Phil Shenk (pictured right and far right respectively) are setting up this new venture, based in Austin, Texas, with the aim of creating an unannounced new IP. The duo is set to build upon their experience creating action RPGs.

He also previously worked as CEO of a company called, er, Moon Beast Entertainment, describing his role as a "producer and innovator of digital entertainment on disruptive technologies (including blockchain, VR/AR, transmedia)."

“We have huge ambitions for Moon Beast Productions and what we can achieve together,” Hu said. “Phil and I bring a wealth of experience to the table, and we’re both extremely excited about this new project. Fans of our previous work will be hoping we stay true to our ARPG roots, and I don’t think they’ll be disappointed, but we are also working on a few big innovations with incredible potential.”

Shenk added: “This partnership is inspiring for me because consistently throughout our careers, we’ve both been passionate about making unforgettable game experiences. And what we’re working on now is exactly that, but also really stretching into some innovative territory. Peter’s incredible design and technical skills and my passion for world-building and creative direction are an unbeatable combination. Not only that, but we’ve both been entrepreneurs and know what it takes to run a company. We’re just as passionate about building and a nurturing healthy, supportive, collaborative team culture as we are about making fantastic games. I’ve never been more excited about the potential for something as I am for what we’re doing here at Moon Beast!”