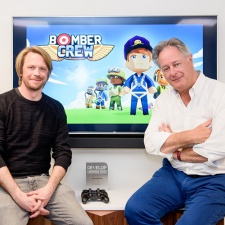 The Brighton-based developer has been snapped up for an undisclosed amount, consisting of a mix of cash and shares. This is set to be the first of many acquisitions by Catalis, according to CEO Dominic Wheatley.

As a result of this deal, there are two more Crew games in the pipeline which are set to be published by Curve Digital starting in 2020.

“Given the relationship between the two companies and the success we’ve both enjoyed, this agreement feels like the natural next step,” Runner Duck co-founder Jon Wingrove said.

“There was a natural fit from the moment we first met the Curve gang, and so we’re delighted to be able to ink an agreement which gives us the support and resources to continue the Crew franchise.”

Fellow co-founder Dave Miller (main picture, left) added: “We’ve huge plans for what we do next, and joining Catalis offers us the means to accelerate plans for our next games. Bomber Crew has been such an incredible success – we can’t wait to unveil what’s coming next.”

Finally, Catalis boss Dominic Wheatley (main picture, right) commented: “Bomber Crew was our first fully-funded game as ‘New Curve’ so it makes sense that Runner Duck is our first acquisition. The Runner Duck team are such a joy to work with, so we’re thrilled to be partnering with them to create the next in the Crew series. But this is just the start of what we want to do as a group – there’s so much more to follow. Over the coming year, we’ll be seeking more acquisition targets as we continue to build Catalis into one of the UK’s most significant gaming companies. Whilst we’ve been working hard behind the scenes on additional potential partners, studios who want to be a part of this incredibly exciting time should absolutely get in touch.”

At the time this deal was set to create a "major new British games publisher". Given its mix of development, publishing and service businesses, we wouldn't be surprised to see The Catalis Group pursuing a model similar to Keywords Studios; buying up talent in a bid to become a one-stop-shop for releasing a game.