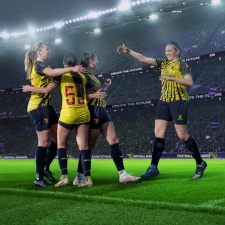 Sega's Sports Interactive studio has said that it is bringing women's football into its long-running Football Manager franchise.

The developer hasn't put a date on when this will be launched, but in its announcement press release says that it hopes to roll it out "as soon as realistically possible." Sports Interactive has said that it wants to depict women's football as accurately as possible and won't be releasing anything until it is sure it has met this standard.

“We have NO interest whatsoever in making a standalone women’s football version of FM. What we are doing is adding women’s football to FM... one sport, one game,” Sports Interactive's studio director Miles Jacobson said.

“We want to be a part of the process that puts women’s football on an equal footing with the men’s game. We know that we’re not alone in this – the historic TV deal that Sky and the BBC recently agreed with WSL in England is proof of that – but we intend to do everything we can to get women’s football to where it deserves to be.”

The manager of Chelsea FC Women, Emma Hayes, added: “Women's football is capturing the imagination of fans across the globe and we're making huge strides in terms of attendance figures and broadcast deals,” says Hayes. “For the women's game to get to the next level, though, it needs to be recognised as an integral part of the world of football, not something separate and different. We want future generations to grow up in a world where football isn't divided into 'women's' and 'men's'... it's just football. The ambitious plan that the Sports Interactive team have for Football Manager will play a huge part in getting us there.”

Sports Interactive has been making a real effort in recent years to make Football Manager as inclusive as possible, rolling out adverts for the Football v Homophobia campaign and giving free ad slots to mental health charities in 2020.