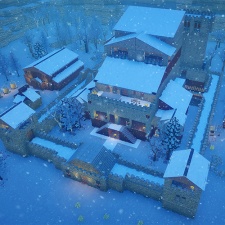 The game, made by developer Foxy Voxel and published by Tonic Games Group's The Irregular Corporation, was released into Early Access on June 1st and already boasts "very positive" reviews on the platform.

It came ahead of the Season Pass for Studio Wildcard's Ark Genesis thanks to a 15 per cent price cut and the launch of Part Two of Genesis content. This is likely why Ark: Survival Evolved has come in fifth place this week, up from last week's No.8.

Rare's Sea of Thieves maintains its hold on third place for the week, while the newly-launched Warhammer shooter Necromunda: Hired Gun from makes its debut in the Steam Top Ten at No.4. That title was published by Focus Home Interactive and was made by Streum On Studio, the developer it recently bought. It was also released during a huge Warhammer sale on Steam.

Fellow EA title Battlefield V makes a return to the Top Ten in ninth due to a 67 per cent price cut ahead of the next entry in the franchise being revealed this coming week.

Finally, Hello Games' No Man's Sky came in No.10 thanks to the Prisms update, which improved the sci-fi exploration title's visuals.

Here is the Steam Top Ten for the week ending June 5th: