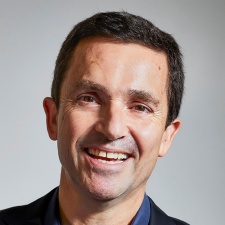 "Games" company Atari is splitting itself up into two new divisions.

One – Atari Gaming – is going to focus on video games, the VCS console and licensing, while the other – Atari Blockchain – is going to be doing blockchain things, such as NFTs and the Atari Token cryptocurrency. The latter has been structured as an "autonomous entity" that could be spun off into its own company at some point.

As part of these changes to the Atari business, CEO Frédéric Chesnais (pictured) is stepping down from his position to "focus on" the company's blockchain and licensing divisions. Wade J Rosen will be replacing him as chief executive officer of the entire Atari business.

“I'm honoured to be a steward of something as iconic and legendary as Atari," Rosen said.

"I would also like to thank Fred Chesnais for turning around the company, which is now well-positioned for such incredible long-term success. When Fred stepped into the role of chief executive officer, he inherited a situation burdened with debt. Since then, he has eliminated debt and enacted a meaningful turnaround. He had the foresight to push Atari into cutting edge markets like Blockchain, the VCS, and the Atari Hotels. It's because of him that the company is at its strongest valuation in seven years. We thank Fred for his leadership and are excited to continue working with Fred as he focuses on Licensing for the entire group and the development and growth of the exciting Blockchain division created today."

Chesnais added: “8 years ago, when I came back, the brand was given for dead. This spectacular turnaround is the result of solid teamwork and support from the shareholders, and I would like to thank each and every one of these individuals. We can all be proud of this outcome. The Atari brand is alive, more than ever, and this organisation in two divisions will help us adapt to the changes in our business line.”

In recent years, Atari has started to become increasingly involved in the crypto and blockchain markets. Back in 2018, it said it was launching its own cryptocurrency, dubbed Atari Token, while earlier in 2021 it jumped on the non-fungible token (NFT) bandwagon with tributes to classic IP Atari made back in the day.

The company has also previously said it wants to "level up" hotel entertainment –  whatever that means.

Last year, Atari started rolling out its VCS console to the folks that backed it. The machine was released amid a great deal of controversy, including Atari accusing media outlet The Register of lying about an interview it did, so the journalists just released the audio to prove the games firm wrong.

The VCS was delayed multiple times before finally being released to backers in December 2020. In the press release announcing these huge changes to its business, Atari says that the coronavirus pandemic delayed the launch of the VCS, which is sort of true, but it was also bumped back numerous times before COVID-19 hit the world in the face.

Oh, and Xbox co-creator Rob Wyatt is suing Atari, too. His firm, Tin Giant, was brought on board to work on the VCS, but claimed in a lawsuit that it had not been paid.

Are you even surprised Atari is jumping on the NFT trend with Pong and Centipede tributes?

Of course Atari is launching its own cryptocurrency