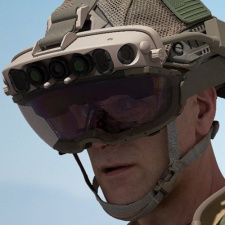 Software and tech giant Microsoft has scored a huge new contract with the US Army.

As reported by CNBC, the firm will be making over 120,000 HoloLens augmented reality headsets for the military in a contract worth up to $21.9 billion over ten years. The tech will allow give soldiers night vision and thermal vision capabilities, as well as audio comms thanks to its Integrated Visual Augmentation System (IVAS). This follows the company previously creating a prototype for this tech for the US Army.

"The IVAS headset, based on HoloLens and augmented by Microsoft Azure cloud services, delivers a platform that will keep Soldiers safer and make them more effective," Microsoft technical fellow Alex Kipman said in a blog post on the topic.

"The program delivers enhanced situational awareness, enabling information sharing and decision-making in a variety of scenarios. Microsoft has worked closely with the U.S. Army over the past two years, and together we pioneered Soldier Centered Design to enable rapid prototyping for a product to provide Soldiers with the tools and capabilities necessary to achieve their mission.

This move will no doubt cause waves inside Microsoft. In the past, employees have protested some of the contracts the company has scored, including those with US Immigration and Customs Enforcement (ICE). This isn't the first time that Microsoft has worked with the US military for HoloLens. Back in 2019, CEO Satya Nadella defended this partnership, saying that he viewed it as a part of the company's corporate responsibility.

Microsoft boss Nadella defends HoloLens contract with the US military