Microsoft boss Nadella defends HoloLens contract with the US military 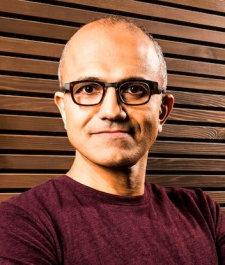 Speaking to CNN Business, the Big M boss said that he saw providing this tech to the military was part of Microsoft's responsibility as a corporate citizen. This contract has been controversial among employees as the company, many of whom signed an open letter to Nadella (below).

On behalf of workers at Microsoft, we're releasing an open letter to Brad Smith and Satya Nadella, demanding for the cancelation of the IVAS contract with a call for stricter ethical guidelines.
If you're a Microsoft employee you can sign at: https://t.co/958AhvIHO5 pic.twitter.com/uUZ5P4FJ7X

"First of all, we welcome dialogue with our employees on a continuous basis," he said.

"When this first came up, we had the dialogue, we deliberated and we made a principled decision that we are not going to withhold technology from institutions that we have elected in democracies to protect the freedoms we enjoy. We were very transparent about that decision and will continue to have that dialogue. We are also clear-eyed about the responsibility we have as a corporate citizen on the unintended consequences of technology. We have done this with privacy, we have done this with cybersecurity - even calling for a Geneva Convention - and the same thing for AI and ethics."

The Big M isn't the only company that PCGamesInsider.biz writes about regularly that has dealings with the US Department of Defences. SpatialOS firm Improbable signed a $5.8m contract with the American military at the end of 2016 via its Defense Innovation Unit.