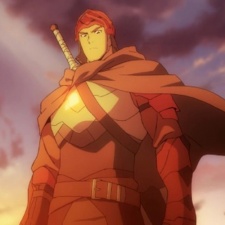 Valve's blockbuster MOBA Dota is being adapted into an anime show for Netflix called Dragon's Blood.

That's according to Deadline, which reports that this eight-episode run will be debuting on March 25th on the streaming service. The show will apparently follow the adventures of Davion the Dragon Knight and the princess Mirana.

"Fans will love how we’ve imagined the DOTA 2 universe and woven together an epic, emotional, and adult-oriented story about some of their favourite characters," Miller wrote.

"The cinematic animation, acting and music are simply next level and I’m grateful to Valve for supporting our creative ambitions."

Dota joins the long list of video game IP that have been adapted into anime shows for Netflix. At the end of January, news broke that Tomb Raider was getting this treatment, while an animated adaptation of Konami's Castlevania has been running since 2016. An anime take on Capcom's Dragon's Dogma debuted in 2020, too.

Ubisoft is also turning its Rayman, Watch Dogs and Blood Dragon IP into anime shows, while Blizzard is looking into animated adaptations of its Overwatch and Diablo franchises.

You can check out the trailer for Dota: Dragon's Blood below: