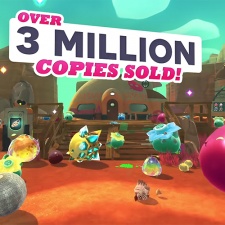 That's according to developer Monomi Park, who revealed the news in a video on YouTube (below). The title launched in 1.0 back in August 2017, having previously been in Steam Early Access back in January 2016.

By May 2017, the game had sold more than 800,000 units, before crossing the one million mark in August 2017 following its launch on PC and Xbox One. In February 2019, Slime Rancher hit the two million sales milestone, following its release on PlayStation 4 in August 2018.

There's no indication what portion of the title's current three million-plus sales were made on each platform.

Those three million sales will be on top of the 4.5m times the game was downloaded on the Epic Games Store when Slime Rancher was available for free in March 2019.