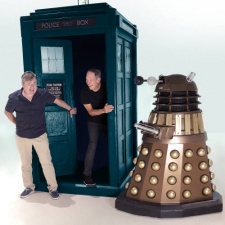 A new trading card game based on one of the world's premier sci-fi franchises is making its way to the blockchain.

Trading card games using blockchains to secure the item ownership of their players are currently generating a lot of momentum.

From Splinterlands - currently the most popular blockchain game - to forthcoming titles such as Gods Unchained and SkyWeaver, the genre is providing an excellent fit with this nascent technology, for players and those more interested in their speculative potential.

Both groups should be very interested in Doctor Who: Worlds Apart, which has just been announced by Reality Gaming Group.

This is the first time any BBC IP has been cleared for use on blockchain - and it's under an exclusive global license from the company. The free-to-play game will feature card-based characters from across the entire Doctor Who universe, and it'll be coming to PC first next year.

The game element will see players collecting cards to build a deck, then battling out in head-to-head bouts to see who has the best strategy.

Of course, because the ownership of each unique card will be secured using the Ethereum blockchain, players will also be able to sell their cards and buy new cards, making trading a key part of the game experience.

A limited number of packs, each consisting of five cards of different rarities, will initially be available for purchase in October 2020.

A new set of packs featuring other Doctor Who characters will be available when the game launches in 2021, first on PC with support for mobile devices to follow.

Based on Reality Gaming Group's experience operating its first blockchain game mobile shooter Reality Clash, Doctor Who: Worlds Apart will use the Digital Asset Trading platform to securely create cards and enable players to trade them in an accessible and honest manner.

"We are tremendously excited to be working with BBC Studios to bring Doctor Who's huge global community an exciting new digital experience based on a pastime we all know and love – trading cards," commented co-founder Tony Pearce.

"The cards used in Doctor Who: Worlds Apart are both functional and collectible, so fans can actually own a piece of the game while they play."

John Kavanagh, Licensing Manager, Gaming and Interactive, BBC Studios, added: "This is what BBC Studios does so well, exploring new technologies and bringing our most iconic brand to an area of the gaming industry which we're sure will engage and thrill fans."

More details can be found at the game's website.