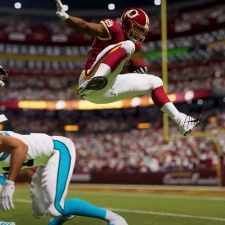 US publishing giant Electronic Arts has said that it will be changing the name and branding of the Washington American football team in the upcoming Madden NFL 21.

This tweak comes in the wake of Washington team owner Daniel Snyder dropping the old 'Redskins' and Indian head logo for their obvious and long-standing racial connotations. Snyder and coach Ron Rivera are apparently working on a new name and branding at the moment.

According to USGamer, EA will be changing everything related to the Washington team in the upcoming game. All audio, commentary, motion graphics, stadium art, environments, crowd gear, signage and uniforms will be changed to a generic Washington theme.

"We are pleased to see Washington's decision to change their team name and visual identity," an EA spokesperson told USGamer.

"We are quickly working to update Madden NFL 21 to feature a generic Washington team, while we await final word on the updated team name and logo design."

This comes in the wake of the Black Lives Matter protests across the United States and the world.

EA is being taken to court over Ultimate Team loot boxes