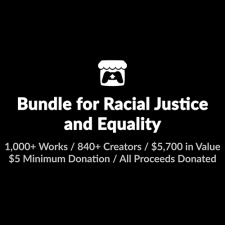 The Bundle for Racial Justice and Equality on indie storefront Itch.io raised $8.1m in the ten days it was on sale.

The charity bundle is no longer available, as of 7:59am BST, raising a $8,175,420.81. That's well over the $5m goal that Itch.io had set out for the Bundle for Racial Justice and Equality when it launched on June 6th.

Proceeds from charity bundle are being split evenly between the NAACP Legal Defense and Educational Fund, and the Community Bail Fund. the Bundle for Racial Justice and Equality was launched in the wake of George Floyd's death at the hands of Minneapolis police officer Derek Chauvin. This sparked a new wave of Black Lives Matter protests across the United States around the world, with citizens tired of structural racism and police brutality.

Itch.io is one of many companies that have donated or raised money for Black Lives Matter causes. Fellow storefront Humble has said it has set aside $1m to publish titles from black creators, revealing the Black Game Developer Fund shortly after. Meanwhile, Microsoft's Double Fine donated $12,000 to anti-racist charities and 343 Industries has said it will be donating all microtransaction revenue from Halo 5: Guardians to the NAACP between June 19th and July 19th.

Don't Starve studio Klei has donated a massive $1m to Black Lives Matter causes. Meanwhile, Call of Duty studio Infinity Ward and EA Sports have both vowed to crack down on racism within their games.