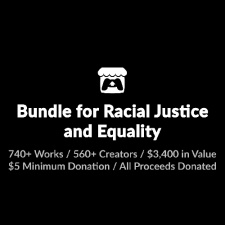 Indie games storefront Itch.io has raised more than $2m for Black Lives Matter causes thanks to a newly-created bundle.

At the time of writing, the platform has raised over $2.3m. The funds are being split 50/50 between the NAACP Legal Defense and Educational Fund, and the Community Bail Fund. Itch.io's Bundle for Racial Justice and Equality features 740 games from over 560 developers. In total these are valued at $3,400, but the minimum donation to buy the bundle is just $5. At the time of writing, 200,252 people have contributed an average of $11.53. The top contribution is $5,000.

Itch.io is hoping to raise a total of $5m for these causes.

"We live in a time of racial injustice, inequality, and police brutality against black people," Itch.io said.

"We hope that everyone takes a stand in any way that they can. We’ve partnered with creators from all across our platform to support organisations that are working directly with those affected."

You can find the Bundle for Racial Justice and Equality right here.

Itch.io is one of many games companies that have voiced their support for the Black Lives Matter movement but is one of a smaller list that has actually tried to help the situation. Others include Humble, which has created a $1m fund to publish projects from black developers, while adventure games firm Double Fine has donated $12,000 to anti-racist charities.

You can find out more about how you can help right here.