Ninja Theory: Online games culture doesn't have to be toxic and angry 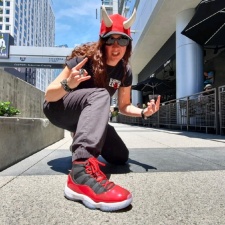 Bleeding Edge developer Ninja Theory has said it wants to make sure its forthcoming fighting game doesn't have the same toxicity and angry culture that many titles do.

That's according to creative director Rahni Tucker, who told PCGamesN that the studio wants to make sure that its upcoming brawler has a fun and enjoyable atmosphere. The developer says that Ninja Theory has gone for a colourful aesthetic and energetic tone in order to create a different atmosphere to similar titles on the market.

“Personally I sometimes find the culture in online games can be a little toxic and a little angry and we were like: ‘Why does it have to be like that?’” Tucker said.

“We realised we could make a game that celebrates competition in the way that you would go with a bunch of your mates and play footie in the park, where you’re against each other while you’re playing, but then you’re going to go and have a beer after. So we thought we should make this about being friendly, enjoyable, and playful. The whole thing’s a little bit tongue-in-cheek. It’s meant to be fun, right? It’s not meant to make people angry. That’s the kind of community that we want to help."

Bleeding Edge was revealed at E3 2019 and is the first title to come out of Ninja Theory since the studio was acquired by Microsoft back in 2018. The firm has revealed another title is in the works, dubbed Project Mara, in addition to a follow-up to 2017 smash hit Hellblade: Senua's Sacrifice.

Bleeding Edge is set for a March 24th release.