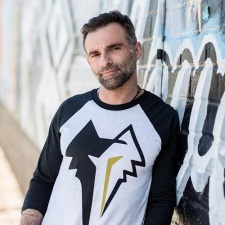 A group of former developers from Dishonored maker Arkane have set up a brand new outfit called WolfEye Studios.

The venture is being headed up by former president and creative director Raphael Colantonio (pictured) - who left the industry in 2017 - and executive producer Julien Roby, with a debut project set to be announced at Geoff Keighley's The Game Awards 2019, which is taking place on December 12th.

In an interview with Gamesindustry.biz, Colantonio said that the company isn't going to be chasing the best-looking or most technical game. Rather, WolfEye wants to be pursuing new and interesting ideas.

"I notice both as a developer and a gamer, I think it's been two or three generations of games now, I've been playing the same game," he said.

"The only difference is that it's more beautiful, higher resolution, more shaders, but really the game is the same. I remember this funny moment where we were doing Dishonored, and I asked my lead programmer how many characters I could have in combat. And he answered something between five and six. I thought well, okay. It makes sense. The AI is what it is, and we had characters with 10,000 polys or whatever they were. Fast forward four or five years, we're doing Prey. It's a new engine, new technology, new hardware. I'm back with my lead programmer, same question. How many characters can we have? Maybe five or six. The only difference between one generation to the next was that the budget had doubled, and because the budget was doubled, it goes into more people, instead of taking three months to make a character it takes six months now, there's more optimization that is required, more of everything, every detail, making sure the eyes are perfect and the sun shines the right way.

"But the more you go into that kind of development, the less flexibility you have to make changes. And in a world where making games is all about innovation, R&D, and trying things, that heaviness of graphics and production prevents flexibility, coming back on ideas, trying something else. Because everything is so expensive, the team is unhappy because you're changing direction.

"That's not to say we don't like visuals. We're huge fans of great art direction, compelling worlds, interesting stories, but there's a distinction to be made between art direction and graphics. We all remember games with very powerful art direction. We don't remember any game with powerful graphics, unless it had both."