Developers Swery65 and Suda51 are teaming up for a new project 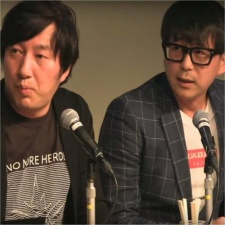 Developers Hidetaka 'Swery65' Suehiro and Goichi 'Suda51' Suda have banded together for a new project.

During an IGN Japan livestream, as reported by IGN, Suehiro and Goichi - known for Dead Premonition and No More Heroes respectively - originally teamed up in 2018 for a PlayStation VR game centred on food.

The new project has been named Hotel Barcelona, and is being developed on a $1 million budget. It is slated to be a horror game, however, there are no solid details on the game or the direction the developers plan to go in.

All we know for certain is that they want to create something “light and easy to play,” for mobile, Switch and Stadia. Suda has cited Siren - a PS2 survival horror title - as an influence for the new project.

During the live stream the developers sent a message to Siren director Keiichiro Toyamo, they hoped to rope him to helping them create Hotel Barcelona. Remarkably, the pair received an answer - yes - during the livestream.

The title is set to be published by Devolver Digital, who took to Twitter (below) to claim they were not aware of the deal.

Recently, the publishers gun-happy game My Friend Pedro was on its way to having sold 500,000 copies. However, 250,000 units were sold during the games first week after launch.

Earlier this year, we caught up with Devolver Digital co-founder Graeme Struthers at Gamescom. He discussed how the label sees its first 10 years.