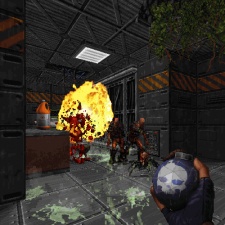 The developer of forthcoming retro shooter Ion Fury Voidpoint has said it will be keeping homophobic content in the title that it already said would be removed following a Steam review bombing from fans.

The studio said it would remove in-game slurs, including the word 'fagbag' and the 'Ogay' in-game soap item, a genius play on the brand 'Olay'. Voidpoint apologised for the "pain" this had caused and said it would donate $10,000 to LGBTQ charity The Trevor Project. This follows allegations of homophobic and transphobic language in the game's official Discord server.

"Members of Voidpoint's Ion Fury team have made sexist and transphobic comments, and included homophobic language in Ion Fury," the company said in a statement to Eurogamer.

"We recognise these statements are insensitive, unacceptable, and counterproductive to causes of equality. We unequivocally apologise both for these comments and language as well as for any pain they have caused the gaming community, particularly women and members of the LGBTQ community. We take full responsibility for any damage that has been done to the relationships we've worked so hard to build.

"Moving forward, Voidpoint will institute a zero-tolerance policy for this type of language and all employees and contractors will undergo mandatory sensitivity training. As part of our efforts to contribute to the work that must be done to further support these communities, we are donating $10,000 from Ion Fury's release day proceeds to The Trevor Project. We are also patching Ion Fury ASAP to remove all unacceptable language."

This apology resulted in members of the games community saying that Ion Fury was being censored, with users review bombing the game on Steam. The result? Voidpoint and publisher 3D Realms saying in an update on Steam that it would not be removing 'Ogay' from the game.

"We’ve caused a recent controversy suggesting Ion Fury game content was to be censored. We will absolutely NOT be censoring Ion Fury or any of our other games, now or in the future, including but not limited to by removing gags such as gaming’s most controversial facial wash," the update said.

"We do not support censorship of creative works of any kind and regret our initial decision to alter a sprite in the game instead of trusting our instincts. 3D Realms and Voidpoint stand together on this matter."

On Twitter, Voidpoint has since said that PR reps added an extra line to its initial apology and that the studio had come up with an "unoffensive" alternative to the initial joke.

3D Realms has said in a statement to GamesIndustry.biz that Voidpoint would be honouring its commitment to donating to The Trevor Project and that the publisher wouldn't include jokes at the expense of marginalised groups in its games in future... unless the community really seems to want them it would seem?

"We at 3D Realms spoke with Voidpoint today and they reaffirmed their commitment to honoring their original statement, including the donation to The Trevor Project and sensitivity training. However, the soap bottle will not be removed," the company said.

"The use of the word “f*gbag” in an area that was inaccessible without hacking the game, and was added by one developer without approval from anyone else, was removed a few days ago. We once again apologize for this text as it does not reflect the values of 3D Realms or Voidpoint.

"Jokes at the expense of marginalized communities will not be present in future games published by 3D Realms. However, a portion of our community made it loud and clear they felt removing 'Ogay' was censorship and should be protected by free speech. Voidpoint wanted to listen and we respected this decision."