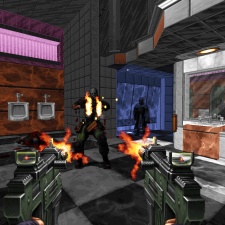 Iron Maiden Holdings, which represents the 45-year-old band, is looking for $2 million in damages and the transfer, or takedown, of the Ion Maiden website. The lawsuit was filed at the Central District of California court on May 28th.

Representatives for the band claimed this is a deliberate move on 3D Realms' part to "confuse consumers into believing the Defendant’s products and services are somehow affiliated with or approved by Iron Maiden", rather than simply referencing a heavy metal icon for its heavy metal shooter.

“Defendant’s misappropriation and use of a virtually identical imitation of the Iron Maiden trademark creates a likelihood of confusion among consumers,” read the lawsuit.

“Customers who view Defendant’s video game and merchandise are likely to believe that Iron Maiden is somehow affiliated with the Defendant.”

Key to the suit is an alleged similarity between the name and branding (compared below). While there’s some similarity in the bold angular choice of font, you’d need to reach to claim 3D Realms is ripping off the band’s trademark “steelcut” branding.