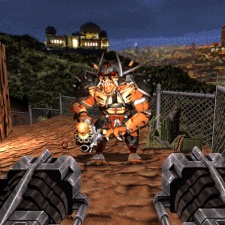 As reported by GamesIndustry.biz, the studio has resolved its differences with composer Bobby Prince, as well as developers Apogee Software and 3D Realms. This latest bought of lawsuit flinging began in 2019 when Prince sued Gearbox for not paying him royalties for 2016's Duke Nukem 3D: 20th Anniversary World Tour.

Gearbox, it turns out, thought it had owned the rights to the music having purchased the Duke Nukem IP from Apogee back in 2009, but it turns out that they weren't the studio's to sell. Earlier this year, Gearbox sued 3D Realms and Apogee Software over this.

"There's been a lot of interest about my lawsuit and Gearbox. I'm glad to announce today that the matter with Gearbox is resolved," Prince said in a statement.

"After productive discussions, we have reached an agreement that allows my music and sound effects to remain in Duke Nukem 3D: 20th Anniversary World Tour. I appreciate Randy Pitchford and Gearbox for their collaboration, partnership, and understanding. I'm thankful that we can put this behind us and move forward."

This is just the latest bout of Duke Nukem legal drama for Gearbox. The firm sued 3D Realms in 2014 for making Duke Nukem: Mass Destruction without its permission. The case was settled out of court the following year, with Gearbox being established as the true owner of the Duke Nukem IP.