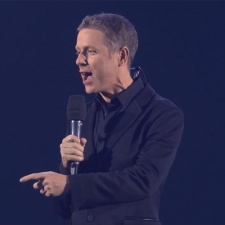 This year's Gamescom saw Geoff Keighley of The Game Awards fame kicking off the Cologne fair with a two-hour long event designed to showcase some of the biggest and most interesting titles around.

Arguably the most interesting new project shown off in Germany was Disintegration from 30-strong Seattle-based V1 Interactive. This is a totally-not-Halo tactical vehicular sci-fi shooter title from, er, the creator of Halo, Marcus Lehto's new studio starring some guy in metal armour. That's being published by Take-Two's Private Division label.

There was also Death Stranding - as touted by Hideo Kojima's BFF Geoff Keighley - during which the Metal Gear creator showed off two new characters and some real brief gameplay.

Yager of Spec Ops: The Line fame also took to the stage showing off its brand new free-to-play PvPvE shooter The Cycle. That's out now via the Epic Games Store with the studio handling publishing duties itself.

"We're taking quite a lot of risk with The Cycle to be honest," executive producer Jonathan Lindsay said on stage.

"It's quite innovative. That's not really for everyone. After 20 years, we had to just go for it at some point."

Rod Fergusson from The Coalition - not The Collective, Geoffrey! - introducing a new trailer for Gears 5, this time swapping out the trippy Billie Eilish from the marketing we saw at E3 in favour of, er, Nine Inch Nail's Head Like a Hole.

Oh, and Comanche is making a return via developer Nukklear and publisher THQ Nordic.

Here is every game that was shown off at the Gamescom Opening Night Live: