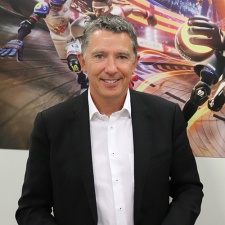 Of all the triple-A publishers, French firm Ubisoft is arguably the most interesting to write about. The company has a huge amount of development talent to its name, producing some of the biggest franchises on the planet alongside strange creative experiments that you'd expect from the indie scene, not a publicly-listed company.

We caught up with the firm's EMEA director Alain Corre at Gamescom 2019 to find out more about the company's eclectic line-up, its new Uplay+ subscription service and how it is going to reach five billion gamers

Your line-up at E3 this year was rather balanced with a decent mix of old and new IP, as well as 'traditional' projects and more service-based titles. I have to wonder how much of this is a cynical top-down box-ticking exercise and how much is people being given the freedom to do what they want.

We have a lot of talented creators at Ubisoft. Some are more interested in creating games for the hardcore audience, say in the shooter category, some are more into action-adventure and some more on the casual products. One good example of that is Roller Champions - there's a team of really talented creators that have been working for other projects at Ubisoft for a long time behind that game. They're very skilled, but they wanted to do something different. Roller Champions is our first attempt at the free-to-play category with high-end games and the feedback we've received since E3 has been incredible. So we feel that there's something burning there and if all the stars are aligned, maybe we'll have a hit on our hands. We are going on, enhancing the product, polishing it, enriching it before we bring it to market early next year. Our hopes are becoming bigger and bigger for this title.

Is this manner of handling creators a way of keeping developers at Ubisoft who might otherwise leave and go indie in order to be more creative, as we have seen at other companies across the industry?

What we want is for our creators to be happy and what is important is that when our creators are happy, they can create great games and our fans are happy as a result. Ultimately, what is the most important thing for us is that we can please our communities with different games, we can grow them, we can give them a lot of pleasure and fun if we can enrich their games with the time they spend in our universes, we are more than happy. Some of our creators are really focused on triple-A games, like the Ghost Recon team. The attention to detail is incredible - I'm amazed by it. When you play this game, it's the first time I've felt a lot of emotions by me having to do camouflage with mud on you. It's really something different because you are afraid of the enemies. That attention to detail is what can make the difference in games and what we aim for is to bring positive emotions to the fans. We'll see, but Ghost Recon has a lot to offer.

At E3, Ubisoft announced the Uplay+ subscription service. What was the thinking behind this platform? And why roll this out now?

What we feel is that we need to offer our fans different possibilities of getting into our worlds and consuming our games. Whether they prefer buying a box or buying a game or streaming now, there are more options for them to get our games now with a subscription service. Some fans have become used to subscription platforms thanks to music or video services and we think that Ubisoft may be the company that is the most adapted to these kinds of services thanks to the depth of our back catalogue and franchises. The offer is very interesting and compelling. More than anything else, we want to give our fans the option to consume that way if they want to. We felt it was the right moment to do that as some people are used to subscriptions in general and that's starting to be the case in video games.

In Ubisoft's last financials, the company reported that PC was the platform behind the largest portion of revenue thanks to Anno 1800. How do you think the UPlay+ service is going to affect your PC revenue moving forward?

What we think is that it can grow our business. Some people are not playing games today but they might be interested in getting in thanks to a subscription. It's a different model, it's a different means of consuming and we think that in offering that, we will gain some consumers. All-in-all it will be very positive for us.

What we like with Stadia is that it is really putting streaming and cloud technology on the map. It has existed in the past but at a very slow level. This is the first time that a big company is betting on this technology

It's not uncommon to see Ubisoft supporting any and all new platforms and technologies very early on, but your support for Stadia is rather interesting. With VR and Switch, Ubisoft made brand new experiences that made the most of the new hardware; with Stadia, so far it's just titles that are coming to other platforms anyway like Watch Dogs Legion and Ghost Recon Breakpoint. Could you tell me a bit about your approach to Stadia and why you are supporting it this way?

What we like with Stadia is that it is really putting streaming and cloud technology on the map. It has existed in the past but at a very slow level. This is the first time that a big company is betting on this technology. We feel that it's part of the future of gaming. Earlier I was talking about consumer choice - some will prefer streaming games versus buying and downloading. We want to offer them this option. This is one of the reasons we decided to be a strong supporter of Stadia and streaming technology. This year is the beginning and it will grow in the future. What we like in this streaming tech is that it will give our studios new capacities and possibilities when creating thanks to all the service capacities in the cloud. You can imagine that in the next two or three years, there will be a very disruptive game that will use all that capacity which means we will be able to have many more NPCs with much greater AI implemented that will completely change your experience. We want to explore that. The other thing is that in some countries or cultures, some people will prefer to stream games. We think we'll gain new consumers in new countries thanks to streaming technology. The combination is very positive for this industry.

Ubisoft has a huge number of studios around the world. Are you still looking to expand? And if so, are there any areas you are interested at looking into?

Our ambition is to continue growing our studios. We don't have enough talents creating all the projects we have in mind. We believe that this market will keep on growing super fast in the future and we want to be part of it and growing within this market. Today we are developing a lot on the mobile side because that's a huge market worldwide, especially in Asia. We want to go in the free-to-play category and Roller Champions is the tip of the iceberg of these type of products that we want to make. We want to continue growing our triple-A IP. We have 15 franchises that have sold over one million copies with strong communities growing in our portfolio. So we want to grow all of this together in a growing market and for that we need more talents. We feel there's talent in every country so when we can find an opportunity to open a studio thanks to talent coming to see us, and with a compelling project or knowhow, then we green-lit.

Are there any particular regions you are eying up? When I was in Poland at Digital Dragons I heard numerous people talking about Ubisoft opening up shop in Krakow.

We are open to any opportunities. We are discussing with all sorts of countries and governments that want to attract and create an interactive industry as we have done in Canada for 20 years. We feel that interactive entertainment is at the centre of the development of a 2.0 technological economy in a lot of countries. We are very open to listening to what these countries can propose to us and if we can find a way that is interesting to us for the projects we have to develop, then we go for it.

Ubisoft boss Yves Guillemot has said that the aim is for the company to reach five billion gamers in the next decade. How big a part of that plan is China?

We think that today around two billion people are playing video games. We feel that in the next years - we don't know how long - it can grow. Yves was saying it'll reach five billion. Today already there are some games in China that are being played by close-to one billion people. If you can consider that this video game market will grow in every market in the coming years, then there's no limit when it comes to the success that one game can have. Obviously, if Ubisoft can have that success, we'll be more than happy.

What lessons have you taken away from Ubisoft making global changes to Rainbow Six: Siege in an attempt to prepare it for release in China? You've walked back on your initial plan and now there are two versions of the tactical shooter - one for China and another for the rest of the world.

We want to be true to our franchises and our gameplay. The modifications to the Chinese version, be those cosmetics or the experience, are similar to the ones that had been live in all the other countries. Our franchises' DNA and our gameplay is really core. We want our fans, wherever they are, to have the same fun in playing our games and that's really the limit of us doing modifications. We want our fans to feel the real essence of what the game is done by the creators and that will be the same in China.

Ubisoft: 17 per cent of gamers subscribe to at least one subscription service