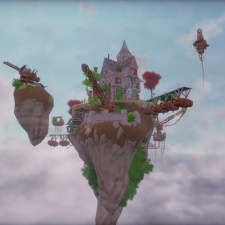 In a blog post, the company said that the title hadn't hit the level of popularity that would allow it to be sustainable. The title will be closed in July 2019.

"At Bossa Studios we love taking risks and making stuff that no one dares to do in order to create great original experiences for players," the firm wrote.

"Worlds Adrift was an ambitious undertaking for us: a community crafted MMO built on freedom and player agency with multiplayer physics, set in a huge world. We are proud of what we achieved with the game since development began five years ago out of a humble game jam.

"We are immensely grateful for every Traveller that’s come to experience this community crafted world. However, Worlds Adrift just hasn’t reached the level of popularity it needs to continue. The challenges that came with our ambitious project meant that all our work went into making the game work rather than making it the experience we wanted it to be. As a result, we failed at making a game that could capture the imaginations of millions. Creating an MMO like Worlds Adrift is a huge financial commitment and unfortunately, the game is just no longer commercially viable."

In 2017, we caught up with lead designer Luke Williams to discuss the title then dubbed 'Minecraft for a new generation' by the UK's Edge magazine. The game launched into Early Access in May 2018, with Bossa CEO Henrique Olifiers telling PCGamesInsider.biz around that time that he saw Worlds Adrift still being around ten years after launch.

The game's closure isn't the end of the road for Bossa Studios, which says it has other titles in the works saying it tends to have three projects in development at any given time.

Though it's unclear why Worlds Adrift has failed to take off, in the past, the company has taken swipes at cloud tech startup Improbable, whose SpatialOS technology Bossa was using to power Worlds Adrift's ambitious persistent world but also required a lot of work from the studio. Worlds Adrift was the first commercial product in the wild using the tech and it's possible that the earlier references to a lot of work going into getting the game to work is in relation to SpatialOS.

"Worlds Adrift’s development has been hurt by some key technical issues since the beginning," CTO Sylvain Cornillon wrote in February 2019.

"We weren’t ignorant of this but believed in the project and team enough to meet these challenges head-on. Recently, this was exacerbated by a fundamental change in the underlying SpatialOS architecture that has left us stuck on an older version and moving onto the new one would require rewriting more than 40 per cent of our code base — the break in retro compatibility in SpatialOS is such that we would have to rewrite the server-side code in a different language."