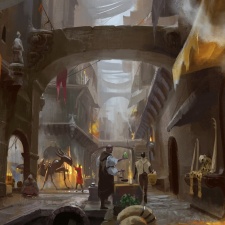 Crowdfunding service Fig has a new option that does away with time restrictions for funding campaigns.

Until now, Fig operated on a similar time-limited model to other crowdfunding sites like Kickstarter and IndieGoGo. Projects had 30 days to raise the funds they were asking for, and that was it.

But the new model, called Open Access, ties funding to milestones and a development roadmap rather than a month-long initial investment rush. Rather than waiting until the end of a campaign, payments are made at the moment of investment.

"As much time as it takes to build a great game, it takes just as long to build a strong community. Given the current environment and considering what it takes to create a game that fans are excited to play, we are announcing Open Access.

“It provides developers with the ability to immediately and positively impact their financial situation, the game's development cycle and organically sustain awareness growth."

Fig’s model already differentiated itself by allowing backers to make a return on their investments like traditional investors. This new model appears to skew even further in that direction, putting deadline-based-demands in the hands of backers while echoing an Early Access “pay early to play early” model.

It’s a curious way to approach crowdfunding. The first project to take the plunge will be Lost Pilgrims Studios’ Vagrus - The Riven Realms (pictured, above).

Kingdoms and Castles sees 100% return on investment for Fig backers