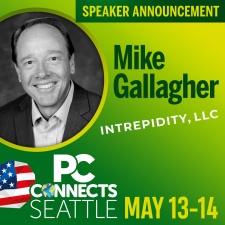 Ahead of PC Connects Seattle 2019 on May 13th and 14th, we are catching up with some of the big names that we have on-stage at the show.

Today, the former president of US video games trade body the Entertainment Software Association Mike Gallagher tell us about how the industry has changed since he joined it and what trends will define the coming years

Intrepidity is my strategic consulting firm, focused on advising company executives and board members on navigating significant cultural and political challenges, and forging connections with catalysts for growth.

Games bring broadband networks to life. Technology is intriguing, but it is the power of interactive entertainment that brings meaning and joy to technologies and communications. The industry has tripled in size over the past 10 years and is beginning to enjoy the respect it deserves as an innovation and creative engine. Leading that effort in the halls of Congress, in state capitols, and in international meetings was a fantastic opportunity. And, watching the industry win again and again at E3, engage billions across the globe and notch emerge as a winner in the US Supreme Court was a career power up. The narrative and technical frontier of video games is unbounded.

Get an internship. Or be a master coder. Or develop a digital success profile in another sector that gives you instant credibility in the super competitive video game space.

The industry has achieved remarkable success. With $43 billion in US revenue and over $100 billion worldwide, the interactive entertainment industry has definitively surpassed the economic impact of movies and music combined. At the same time, the industry constantly integrates new technology -- whether AI or VR or illuminating connection across all communications platforms simultaneously. We are redefining the interface between humans and machines -- but not in a government agency or a university laboratory. Rather, we are doing it in the hands and pockets of consumers. The continued success of mainstays like Nintendo, Xbox, and Sony is a powerful statement. But, the magic of the industry is the door is always open for the outsider to redefine the medium -- as Fortnite has proven over the past year. The industry is on the quest for the next billion gamers and has the power of mobile, AI, the cloud, and free-to-play as winds in the sails.

Despite the success of the past 12 months, the industry faces many tests in the year ahead. The World Health Organization is likely to classify so-called 'excessive video gameplay' as a disease later this month. That classification creates opportunities for critics and those that do not understand the industry to label it as akin to alcohol or gambling -- associations which are categorically false and have dire consequences. Added to that risk is the continued resistance to the loot box monetization mechanism in some games. State governments in the US, European regulators, and now the US Federal Trade Commission have all raised the concern level and either examined or threatened regulation. In addition, the industry continues to struggle with diversity in its employee ranks and in its consumer base. A final overhang is the potential collateral damage from the cultural and political failures of 'big tech'. The regulatory energy around the world challenging major US tech platforms now covers competition, privacy, data security, content-controls, business model design, and employee diversity. The video game industry must make clear that those "solutions" are out of place for interactive entertainment. We enjoy a record of being immediately responsive to our consumers, and we offer them a much fairer and balanced economic and social deal.

When I started in the industry, 90 per cent of the value of a game was on a shiny disc and the rest was either in a box or online. Today, 90 per cent of the value of a game is the hosted experience connected over broadband, and the rest is in the box or disc (if your game has either). When I started in the industry, there was no iPhone. Today, the mobile ecosystem is not only the biggest segment of the video game industry, but accounts for over 80 per cent of all the consumer revenue in the app stores. Oh, and when I started, E3 was dead. When I left ESA last year, E3 delivered nearly 100 billion media impressions and was the platform for worldwide engagement for hundreds of video game companies big and small.

Listening. Game developers are the real creative genius in the tech economy. Period.