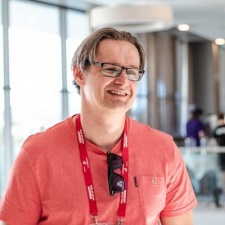 Helsinki, Finland-based studio Housemarque does not have high hopes for its forthcoming battle royale title Stormdivers.

Speaking to VG247, CEO Ilari Kuittinen (pictured) said that a combination of factors has meant that odds are stacked against the studio's take on the popular genre.

“The problem is with us we always have to change our idea," Kuittinen said.

"We originally thought that the game would be a premium game but now it should be free to play. And do we have enough content to do that? I don’t know. We’re kind of a bit short of money to fully realise what we want to do as a launch edition of the game. We’ll see.

“It is tough. Whether we’re going to succeed, it’s unlikely because of the tough competition.”

Speaking to PCGamesInsider.biz at Gamescom 2018, head of publishing Mikael Haveri said that launching a battle royale title in the current market was "ballsy" and "insane", but pointed to people enjoying its take on the genre in Stormdivers. This title comes after the high profile commercial flop of arcade game Nex Machina, too.

The battle royale has been lucrative for some, namely Playerunknown's Battlegrounds, Fortnite and Apex Legends, but there have been several casualties in the genre, too. The Culling 2's launch was so poor that the developer cancelled the game after launch, while Realm Royale from Hi-Rez has seen a colossal drop-off in players.

Housemarque isn't 100 per cent focused on Stormdivers, too, with Kuittinen saying that 15 members of staff are working on the battle royale project, the Helsinki studio has another project in the works with in the region of 60 members of staff in the team.

“Maybe early next year the game will be announced,” he said, adding: “This is the biggest game we’ve ever made."