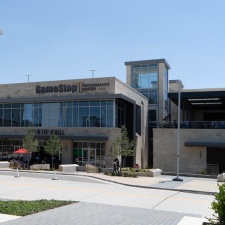 Engadget reports that the brick n’ mortar firm is getting into esports through a partnership with pro-gaming firm Complexity. The 11,000 square foot location will share a site with the owner of that company Jerry Jones’ NFL team, the Dallas Cowboys, and act as the esports team’s new headquarters.

Besides putting a digital sports team alongside physical sports, the Frisco venue will also host a public gaming venue, giving opportunities to mingle with fellow esports fans while training up the next generation of pro gaming stars.

GameStop plans to hold regular training 'clinics' for games like Fortnite, Overwatch and Call of Duty, while amateur tournaments will put these lessons to the test throughout the year.

Over in the UK, High Street retail GAME has also embraced esports, buying Insomnia organiser Multiplay in 2015 for £20m. The company has also integrated pro-gaming into its stores with new Belong locations that feature areas that allow for local esports tournaments as well as selling hardware, software and merchandise.