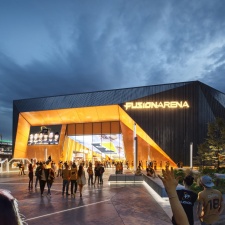 Joint-developers Comcast Spectacor (which owns Fusion) and The Cordish Companies revealed this week that the Fusion Arena will seat up to 35,000 spectators, making it the largest purpose-built esports arena in the western hemisphere.

Fusion Arena will also house an on-site training facility, as well as two balcony bars, suites and loge box seating, broadcast studio, and team offices. Concept designs for the arena (pictured, above) looks to draw inspiration “from the hardware powering esports’ meteoric rise around the globe”.

Which, if nothing else, explains why the arena looks like a big yellow PC case.

"Fusion Arena will set the gold standard for competitive gaming and debut on one of the country’s most exciting platforms of sports and entertainment amid Philadelphia’s professional sports teams," said The Cordish Companies Xfinity Live! developer Blake Cordish.

The Philidelphia arena marks another step towards the Overwatch League’s intended structure of franchises all playing home and away games on their own turfs, rather than at Blizzard Arena in LA. Season 2 spread matches across the home grounds of Dallas Fuel, LA Valiant and Atlanta Reign.

Overwatch League ventures out of LA for second season