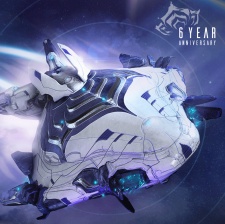 Developer Digital Extremes announced in a very brief blog post that the free-to-play sci-fi shooter-looter hit the milestone over its sixth anniversary this March. Warframe is celebrating the occasion with an event lasting March 27th through April 10th, rewarding players with unique cosmetics.

Warframe passed 38 million sign-ups around this time last year, marking over ten million new players over the last twelve months. At the time, creative director Steve Sinclair expressed a welcome shock at the news, not expecting the game to have lasted over half a decade.

"We had no expectations it would endure even half as long,” said Sinclair. “But you, our Tenno, showed up and guided us and gave us hell! With your support, we've continued to grow and experiment and with your blessing we'll continue to do just that.”

Like before, Digital Extremes hasn’t provided a per-platform breakdown. 2018 saw the sci-fi slasher hit the Nintendo Switch, likely contributing much of the boost in registrations.

Warframe has continued to prove itself a free-to-play powerhouse alternative more than capable of competing with the likes of Destiny or The Division. Last September, Microsoft announced that Warframe would be the first game on Xbox to support keyboard and mouse input.

Warframe first launched on March 25th, 2013, with a severely limited Early Access release on PC. We caught up with developer Digital Extremes at the end of 2017 when the game had surpassed 30m users to discuss the sci-fi title's life so far.

38m people have signed up to play free-to-play Warframe

How Digital Extremes grew Warframe's player base to 30m users