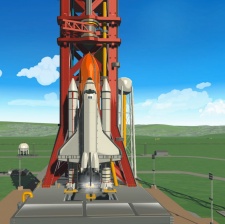 The European Space Agency has lent its support to Auroch Digital for its forthcoming release Mars Horizon.

The game firm's multi-platform planet hopper is basing its turn-based strategic elements on real-world space exploration. Auroch's existing relationship with the UK Space Agency has opened the door to the wider knowledge of the ESA.

The involvement of these space agencies is hoped to add more accurate design elements to both Mars Horizon and its spin-off card game, Mars Horizon: Blast Off.

“Working with ESA is a massive bonus for the Mars Horizon universe,” said design director Tomas Rawlings, in a statement.

“Having access to real launch control specialists who can explain the real-life pressures and challenges they face will help make this game as authentic as we can.”

“The involvement of the ESA is a double win for the gameplay as we’re not only getting to talk to people planning actual missions to Mars but also the people who plan the strategy of the agency itself. To say I’m excited by this partnership is an understatement, I’m (excuse the pun) over the Moon!”

Mars Horizon is set for release this year. In more Earthly news, Auroch has recently found itself on the receiving end of over $250,000 in investment to drive into original IP, too.