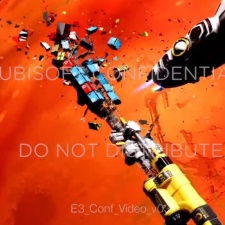 Update: News of Pioneer's death has been overstated.

A new report from Kotaku says that the sci-fi title is currently still in the works but has been rebooted. The project is using Ubisoft's proprietary Anvil engine, specifically the section used by Rainbow Six: Siege.

Original story: Ubisoft has quietly cancelled a game before ever officially announcing it.

Ordinarily, that wouldn’t be a huge deal. Games are born and killed endlessly at studios before they take the plunge into being announced. But in this case, Pioneer wasn’t just another prototype on the cutting room floor.

Pioneer was quietly teased back in 2016 through an easter egg in Watch_Dogs 2 (below). A leaked file stolen by the player character showed an E3 teaser video for a vibrant space adventure.

While never formally announced, Ubisoft confirmed to Kotaku at the time that it was, indeed, a real game.

Until now, that is. Far Cry 4 director Alex Hutchinson revealed via Twitter that the sci-fi adventure had failed to launch. Pioneer is dead.

Now, Hutchinson is no longer employed by Ubisoft - having left and set up his own venture in Typhoon Studios - so this may not be the entire truth. But he’s likely still in touch with current Ubisoft staffers - and after all, Pioneer already missed its planned E3 showing.

Even if Pioneer was coming out, there's a chance that - like The Division 2 - it may have avoided a Steam release.