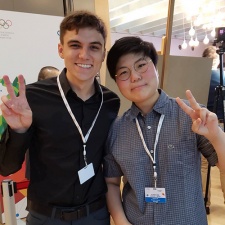 Two Overwatch League players are part of discussions to have esports be part of the Olympic Games.

Houston Outlaws' Jacob 'Jake' Lyon (right) of the and Se-yeon 'Geguri' Kim (far right) from Shanghai Dragons are among those currently in Switzerland meeting with the International Olympic Committee and Global Association of International Sports Federations (GAISF) to lobby for pro-gaming to be part of the global sports event.

The duo aren't the only two esports players on the scene, either. StarCraft II pro Dario 'TLO' Wunsch is also at the gathering, as are Blizzard's Mike Morhaime and Epic co-founder and vice president Mark Rein, per a tweet from GAISF president Patrick Baumann.

This isn't the first time that the industry has tried to get esports onto the Olympics roster and we doubt it'll be the lat.

Chinese tech and entertainment firm Alibaba has said that it wants pro-gaming at the Olympics, but says that non-violent games should make the cut.