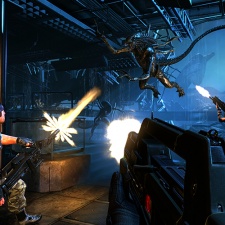 This was pointed out last year by moddb.com user jamesdickinson963 who noticed that the title's PecanEngine.ini used a 'tether' system that managed AI commands to the series enemies, the xenomorphs. However, in another instance this is spelt 'teather' which caused all kinds of problems.

Correcting it has meant that xenomorphs are now able to better flank players and made them generally smarter than they were before. And they were - famously - stupid creatures.

Users who have amended this error report that the game's AI is vastly improved, although doesn't fix the bevvy of other problems Aliens: Colonial Marines faced when it launched.

This was noticed following moddb.com's final 'Game Over, Man!' fan-made patch for the title. Developer Gearbox Studios has not updated the game since July 2013, not long after the game's launch.