Conan Exiles has amassed a 1.5 million-strong horde of sales 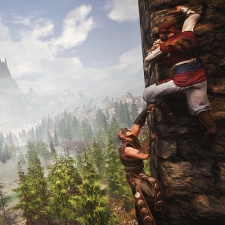 The figure places the sandbox survival atop the throne of Funcom’s best-selling title, exceeding the 1.4 million sales gathered by the publisher’s previous Conan title, Age of Conan: Hyborian Adventures.

The successor to the Conan crown managed to achieve the figure in a far shorter time than its predecessor. Exiles released in 1.0 this May, and saw life in Early Access begin in January 2017 - whereas Age of Conan launched in 2008 and went free-to-play in 2011.

The milestone comes in advance of Conan Exiles’ next expansion, Jewel of the West. Launching in early August, the new content centres on the Roman-themed nation of Aquilonia and will let players tame beasts. Funcom confirms the update “will be free to all players on all platforms.”

The Conan IP remains the strongest weapon in Funcom’s arsenal. Back in May, the publisher confirmed the development of a swords and sorcery strategy title by RTS veteran Petroglyph. Funcom Oslo is also developing an unannounced title set in the world of Conan.

“In addition to the Jewel of the West, the team is also hard at work putting together one of our biggest free updates yet,” said creative director Joel Bylos.

“Launching later this quarter, this update will introduce pets and taming to Conan Exiles, allowing players to find and tame anything from camels to panthers and even spiders and then use them to guard their base, carry resources, and more. This update will be free to all players on all platforms.”