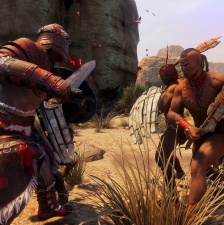 Strategy developer Petroglyph is making a Conan game due to launch in the first half of 2019.

Brutal barbarian action has proven a strong strategy for Funcom, and this Petroglyph title seems to be an attempt to double down on the IP. Conan Exiles was a massive success for the publisher, and has consistently placed high in the Steam Top Ten since its release earlier this month. The publisher has stated that the survival title “will soon be Funcom's best-selling game to date." Conan Exiles has now sold in total more than 1.4 million units - as many as Funcom’s barbaric MMO Age of Conan managed in its first three years.

Funcom end the quarter in good standing: “With $16.6 million in available cash at the end of 1Q18 and only $0.6 million in interest bearing debt the company has a strong financial position, significantly improved compared to recent years.”

Besides the Petroglyph project, Funcom has two more unannounced titles in concepting stages. Pre-production of another Conan title will commence at Funcom Oslo in the latter half of this year. The publisher’s North Carolina studio is currently hiring for a cooperative shooter using one of Heroic Signatures’ IP that “isn’t Conan.” No information on the latter is set to appear this year.

Petroglyph is most notable for strategy titles Star Wars: Empire at War and 2015’s Grey Goo. Its unannounced Conan title is expected in the first half of 2019, with more information releasing “closer to launch”.